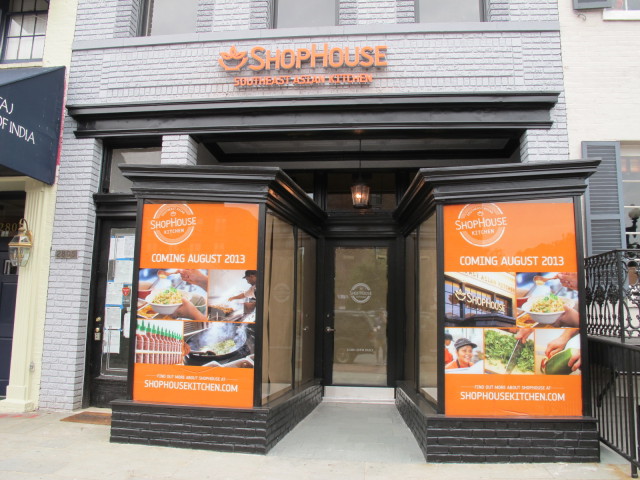 This ShopHouse is located in the former Furin’s space at 2805 M St, NW. ShopHouse’s first location opened in back in Sept. 2011 at 1516 Connecticut Ave, NW in Dupont. You can see their menu here. A third ShopHouse will be coming to the former Ruby Tuesday’s which recently closed in Chinatown at 710 7th Street, NW

“ShopHouse Southeast Asian Kitchen, the Asian-inspired restaurant created by Chipotle Mexican Grill (NYSE: CMG), plans to open its second Washington, D.C. area location in Georgetown on Monday, August 19. This will be the third ShopHouse location, with the first in Washington, D.C. and the second in Los Angeles.

“I believe that Chipotle’s success isn’t necessarily based on burritos and tacos, but rather a unique system that combines our passion for using great ingredients, classic cooking methods, and an interactive service format that allows customers pick and choose exactly what they want to eat,” said Steve Ells, founder, chairman and co-CEO of Chipotle. “Many different cuisines could fit into this model that will help to redefine fast food. I am excited that at ShopHouse we will bring to customers the authentic ingredients and flavors of Southeast Asia in a way that is entirely unique.”

ShopHouse follows the same model as Chipotle, including its commitment to serving food made with better ingredients from more sustainable sources, classic cooking techniques, a unique and compelling restaurant design, a service model that allows guests to customize their meal, and an economic model that keeps it affordable and accessible.

While not strictly traditional Southeast Asian fare, ShopHouse is an interpretation of cuisine from the region, and draws on traditional ingredients, flavors and cooking techniques of Thailand, Vietnam, Malaysia, and Singapore.

Tim Wildin, director of concept development at Chipotle, helped to develop ShopHouse from its infancy. Inspired by his Thai roots, much of the menu is based on his family’s recipes and the food he grew up eating in Bangkok, including the curries and marinades, which would eventually make up the foundation of the ShopHouse menu.

“The Thai side of my family is absolutely obsessed with food,” Wildin said. “I grew up eating traditional Thai food prepared by my mom and my aunt using traditional recipes and cooking techniques. When we were developing the menu for ShopHouse, we knew we wanted those exotic flavors as the basis for many of the dishes.”

ShopHouse pairs the bold and complex flavors of Southeast Asia with fresh, sustainably raised ingredients, drawing on the dishes and cooking techniques of Thailand, Vietnam, Malaysia, and Singapore. The menu at ShopHouse features bold, assertively spiced dishes that are remarkably light and well balanced. ShopHouse’s chicken satay is made with naturally raised chicken, marinated overnight in coconut milk, dried spices, lemongrass, and other herbs, and then grilled. Steak laab takes naturally raised beef, which is crusted in spices and seared, then tossed in a cilantro-lime fish sauce and mixed with toasted rice.

Vegetables are cooked in a hot wok, and include green beans with roasted chili jam and shallots; eggplant with Thai basil; charred corn with garlic and sesame; and broccoli with fermented chili. Priced well under $10, dishes are prepared using traditional Southeast Asian herbs and spices like galangal, lemongrass, ginger, cilantro, and chilies.

Customers order at the counter, and can see directly into an open kitchen — a format similar to the one that has become a hallmark of Chipotle restaurants.

“Anyone who has traveled throughout Southeast Asia can tell you that food there is served very fast, but is also full of flavor, nutritious, and affordable,” said Wildin. “In creating ShopHouse, we wanted to remain true to these characteristics.”

The first ShopHouse opened in Washington, D.C., in September 2011 and a second location opened in Los Angeles earlier this summer. The Georgetown restaurant will be the third ShopHouse location and a fourth is set to open in Santa Monica on Tuesday, Aug. 27.