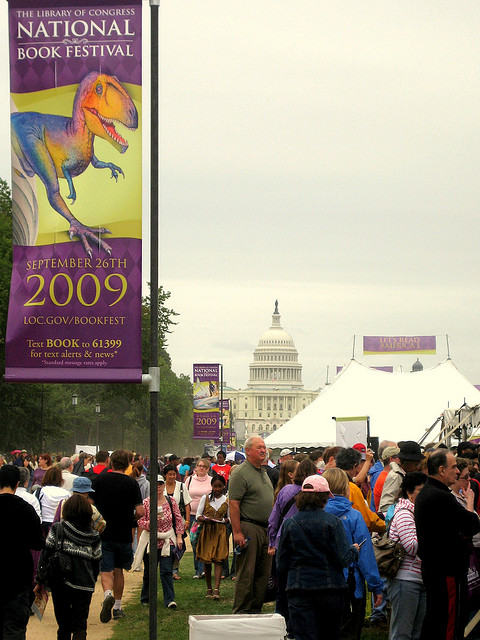 “This annual celebration of reading and literacy, co-chaired by President Obama and Mrs. Obama, occurs September 21 & 22 on the National Mall in Washington, D.C. Now in its 13th year, this two-day festival features an impressive lineup of authors, including;

Hoda Kotb – Co-host of the fourth hour of “Today,” Kotb is the author of the New York Times best-seller Hoda: How I Survived War Zones, Bad Hair, Cancer and Kathie Lee and Ten Years Later: Six People Who Faced Adversity and Transformed Their Lives.

Khaled Hosseini – Author of The Kite Runner, a novel that had a lengthy run as a best-seller that drew on his experiences as a child in Afghanistan. He has since written A Thousand Splendid Suns and his latest novel, And the Mountains Echoed.

Christopher Buckley – Satirist and novelist, Buckley has written many satires on Washington, D.C. including Little Green Men, No Way to Treat a First Lady and Florence of Arabia. Thank You for Smoking, a hilarious look at the life of a tobacco lobbyist, was made into a film in 2005.

What:
The Library of Congress’ 2013 National Book Festival—an annual celebration of books, reading and literature co-chaired by President Obama and Mrs. Obama. This DC tradition gives book lovers of all ages a rare opportunity to interact with and get their books signed by their favorite authors.

For more information and a complete list of authors, visit www.loc.gov/bookfest.

Where:
The National Mall, between 9th & 14th Streets”