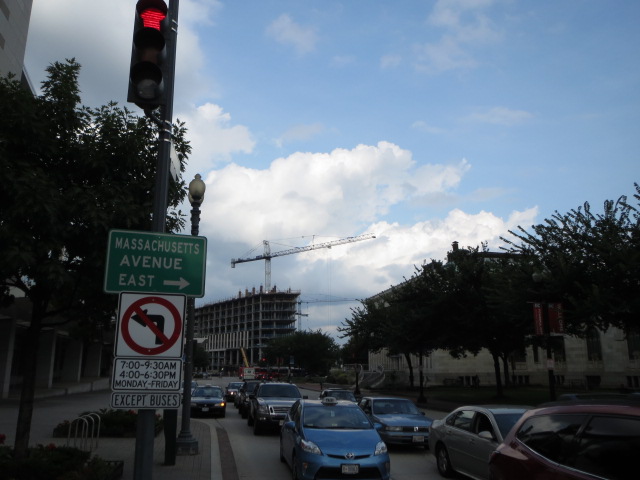 Dysfunction Junction chronicles the most forlorn, baffling, and wonderful crossroads of our fair city. The column is written by Ben Ball, a transportation nerd in his spare time. He lives in LeDroit Park.

Since I clearly botched the last edition by stepping out of my normal milieu, this time I’m going to stick to a far more familiar intersection in the hopes that the lesser deities of blogdom will be appeased [fat chance, I know].  I’ll start off by saying that Mount Vernon Square is actually really nice.  I love the Carnegie Library building, and on a warm summer’s day the surrounding green space can be a nice place to hang out.  Every time I walk by, I wish that the DC Public Library would stop trying to save that crumbling Van Der Rohe box and instead reclaim its rightful place in this stately marble temple. 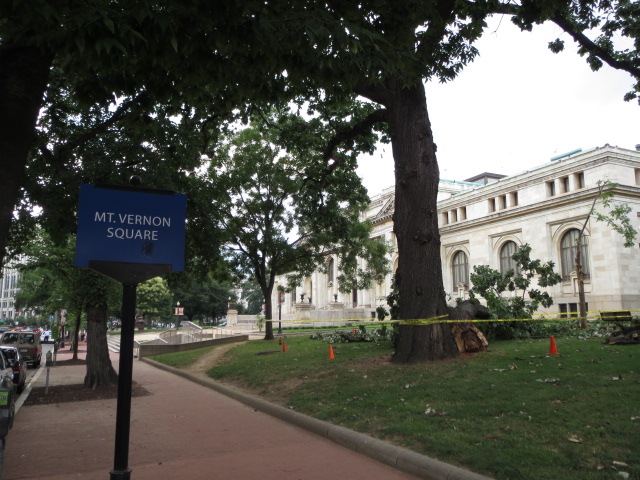 Traffic-wise, one could make the point that Mount Vernon Square is just a wanna-be traffic circle, particularly for those who are trying to get through on Massachusetts Avenue.  Heading southeast on Massachusetts during rush hour usually means a long line of cars stretching back to Thomas Circle – a function of congestion and a narrow window for right turns onto 9th Street. I’m very pro-streetcar, but I worry that the Georgetown extension’s probable route through the square will add an unwelcome x-factor to vehicle traffic if it isn’t done right. 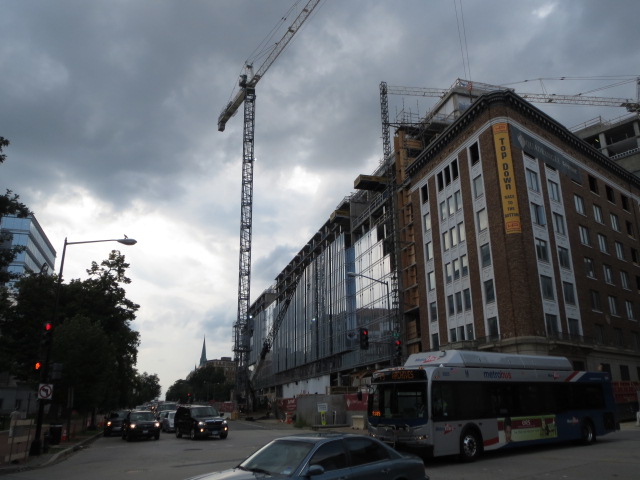 There’s a notable hole in DC’s bike infrastructure here.  Coming northeast on New York Avenue, the bike lane is gritty/sandy (thanks to City Center detritus) before ending in a bone-jarring series of deep ruts on the south side of the square.  Heading downtown, the 7th Street bike lane abruptly ends at M Street.  That’s just when drivers start to swerve between lanes, positioning themselves to navigate the square.  Trucks also like to idle here, adding another layer of complexity.  Seeking protection, I often feel compelled to use the sidewalk, although that can involve dodging the swarms of conventioneers who mill around the area.  (The official DC bike map shows that the 7th Street bike lane/sharrows re-emerge on the south side of the square, but I sure can’t find markings for either one on the street.)

Then there’s all the construction.  That massive Marriott Marquis has gobbled up the surrounding sidewalks forever, and it still isn’t scheduled to open until May 2014.  The old NPR building is no more; the American Association of Medical Colleges building is starting to rise.  Douglas Development is set to redevelop the site of the DC Eagle and the Fringe Festival.  Further afield, those parking lots across from Safeway will probably be the next domino to fall.  If/when all of these grand plans come together, this square is going to be pretty amazing.  It will probably also be a whole lot more crowded.  I’m going to try and enjoy the relative peace of the square while it lasts.