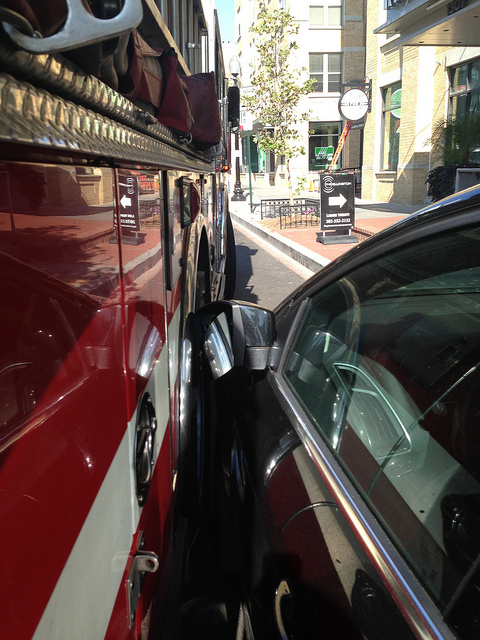 A firetruck sideswiped my friend’s legally parked, unoccupied car this week. I didn’t see the accident, but it appeared that the truck pulled over so the firemen could grab coffee/breakfast at the coffee shop in my building – something I’ve seen them do several times. My friend arrived at her car, needing to leave for work, was told by a fireman – who identified himself as a “public safety officer” – that she was not allowed to leave until the fire chief arrived to take pictures and document the scene. My friend was forced to stay at the scene for over an hour, so that several firemen and police officers could arrive, take pictures, and fill out reports. She had to show her ID and insurance information to three separate officers/firemen. She also had to cancel a client meeting because, again, when she asked to leave, she was told that she could not do so until the fire chief arrived. (She couldn’t disregard their orders either, as the fire truck hit at an angle, pinning her car between the truck, the sidewalk, and another car parked behind it.) Finally, after all that, they moved the truck – revealing relatively minor damage to my friend’s car.

Something just rubs me the wrong way here. I’m not aware of any law requiring someone to stay at the scene when someone hits his/her parked car – especially when they didn’t witness the accident. I’m also not aware of any authority permitting firemen or “public safety officers” to detain people and their vehicles for no reason other than to fulfill the fire department’s own bureaucratic rules and limit the city’s liability. Again, it wasn’t “it will be easier for you to get reimbursement if you stay because the city government is a mess sometimes” – it was “I’m a public safety officer, and you are not permitted to leave.” I also think it’s notable that the firemen were not rushing to an emergency or responding to a call – literally just getting coffee. I see no reason why they should be treated any differently than anyone else in this instance.