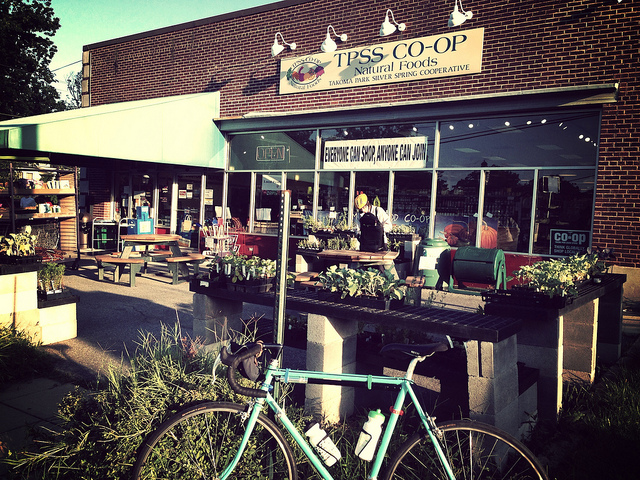 For this installment of Biking Around Town, I wanted to get some fresh fruit and veggies. I decided that it would be fun to ride to the Takoma Park Co-Op. As I was planning this ride, it struck me that there are two different ways to get there – so I rode out one way, and back another. For your convenience, I have edited the maps and described two, one-way routes that start in DC and end in Takoma Park.

The first route begins at the intersection of Park and Mount Pleasant street, NW. Head north up Mount Pleasant, and continue north on 17th street. As you descend down toward the parkway be advised that the sight lines are not great. Make a right on the parkway and continue a short ways to Arkansas avenue and make a right. You’ll continue along Arkansas until you get to 13th, where you will make a left and continue north. Be prepared, it’s a little bit hilly. Follow 13th until you reach Georgia avenue. Cross Georgia and continue on Piney Branch road. At this point you can find a bike lane, which makes the ride easier.

As you continue you’ll cross Eastern avenue on your way to Philadelphia avenue, and you will want to take advantage of a little side street that enables you to make the right onto Philadelphia more easily. Continue up Philadelphia until you get to Carroll avenue, where you will make a left. The Co-Op will be just on your left as you ride down Carroll.

This route is good because the streets are mostly calm. The downside is that it’s a hilly ride – especially Philadelphia avenue. with that said, it is about five miles from where I started and I rode it in about 28 minutes riding at a workout pace.

Starting on the east side of Union Station following second street all the way until K street, the path is technically on the sidewalk. Make the left turn onto K street and ride around to the bike path. You’ll follow the bike path northbound all the way until you get to Chocolate City Brewery, where the off-street trail ends. At that point, you’ll continue along the Metropolitan Branch Trail along the road. If you around on Saturday, you might be able to snag a growler.

Continue along John McCormack drive NE until it turns to the left. The street changes it’s name to Bates road. Continue along until the road ends at Fort Totten drive. Follow that road until you can make a left onto Hamilton street. You’ll follow Hamilton for a few blocks, until you reach 3rd street NW, and you’ll make a right turn. 3rd street will take you to an intersection of Blair road and Aspen street NW. Take a slight right onto Blair, and then make a right turn onto Aspen. Aspen ends at Laurel street, where you can make a left turn. Follow Laurel through town and continue naturally along Carroll avenue. The Co-Op will be on your right.

This route is also pretty relaxed, and it’s a bit less hilly. However, it is longer by about two miles and took me about 50 minutes. When comparing these two routes, there is no “better” or “worse.” It’s all about which one works better for you.

If food cooperatives aren’t your thing, there Gelato at Dolci Gelati as well as Mark’s Kitchen (http://www.markskitchen.com/ordereze/splash.html), and Roscoe’s Pizza. Happy riding, and don’t forget to bring a backpack in case you decide to do a little shopping.