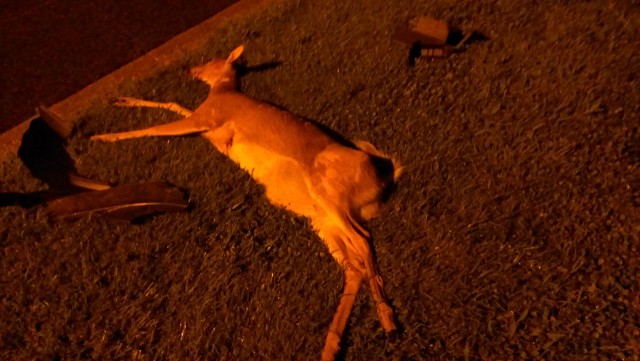 My girlfriend (driver) and I were coming back from McLean Gardens last Saturday morning around 1:30 AM. Heading Southbound on Mass Ave, we both began to notice a figure by the side of the road up near the bus top at Edmunds and Mass close to the Naval Observatory. Already getting close, we slammed on the brakes as soon as we saw it was a deer and that it was heading into the street. By the time we began to slow, it was too late.

The deer stared into our headlights while slowly beginning to run. All this did, however, was place it directly into the path of our Jetta. We hit it square in the hips going about 15 mph, but its forward momentum continued to carry it into the path of unsuspecting, oncoming traffic.

A Honda Civic coming up Mass Avenue hit the deer at full speed, killing it instantly. By the time the whole thing was over, the Civic was missing a right wheel well and front bumper, and we had a nice dent in the hood. No one (but the deer) was hurt.

I pulled the dead doe out of the road and onto the tree bank, and we called 311. They said they’d take care of the deer, but told us to also call 911. When the cops arrived, they were pretty reverent, saying that: “we invaded the deer’s natural territory, and this thing was bound to happen…”

In any event, be careful out there. If it had been a buck or had we been going faster, it could have been much worse.”