The early 20th century was in many ways a golden era for casual restaurants. The rules of the business were changing rapidly, and those who could tell which way the wind was blowing had the opportunity for tremendous success. Lunchrooms had been proliferating since the 1890s, offering fast, inexpensive meals to working folk who could no longer easily go home for lunch and who didn’t feel comfortable patronizing saloons. Then Prohibition killed off the saloons altogether, and the demand only increased for simple, homestyle cooking served quickly and inexpensively. Cafeterias were one solution. The first American eatery to be called a cafeteria had opened in 1893 at the Columbian Exposition in Chicago, and it was an instant hit. As cafeterias gained in popularity over the coming decades, they nearly always sold the same basic, no-frills “comfort” fare—breakfast dishes, sandwiches, meatloaf, salads, cakes, pies, and the like. 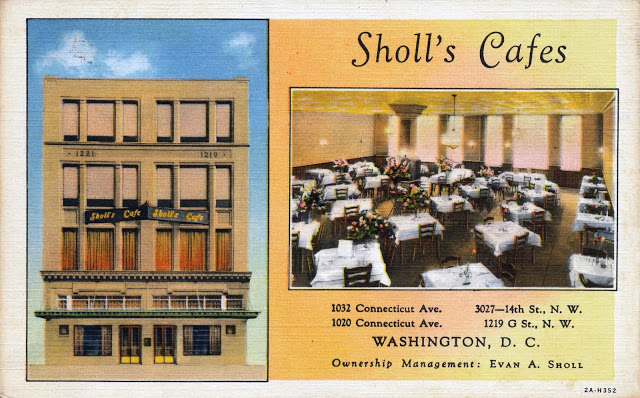 Perhaps the best known in Washington was Sholl’s Cafeteria and Dining Room, opened by Evan A. Sholl (1899-1983) in 1928 at Connecticut Avenue and L Street NW. Sholl, the second-youngest of 13 children born to a Pottsville, Pennsylvania farmer, had started out in life with little to his name. He earned a hardscrabble living at an assortment of odd jobs—busboy, window washer, shoe factory hand—just as J. W. Marriott was doing at about the same time. At age 20 he opened his first restaurant, which quickly bankrupted him. After that he went to work for the Kresge retail chain, which transferred him to its Washington store at 7th and E Streets NW in 1927. He regained his financial footing there and, with more experience under his belt, set out on his own again with Sholl’s Cafeteria. This time it worked.

A write-up in the 1930 Book of Washington noted Sholl’s basic credo: well-prepared food served at a moderate price in a “spacious, well-lighted” place. The down-home cooking included mostly classic American fare, with an occasional hint of Sholl’s German roots, as in the tasty strudels. The low prices in particular resonated with Depression-era customers. Sholl’s offered self-service breakfast and lunch and a “four-course dinner, served by efficient maids, for 65 cents.” In 1929 Sholl opened his second eatery at 3027 14th Street NW, just a block south of the first Hot Shoppe in Columbia Heights, and it was also a great success. Thousands of hearty home-cooked meals were served up to Washingtonians on a daily basis, and Sholl’s chain expanded to eight locations across the city by the end of the 1930s. 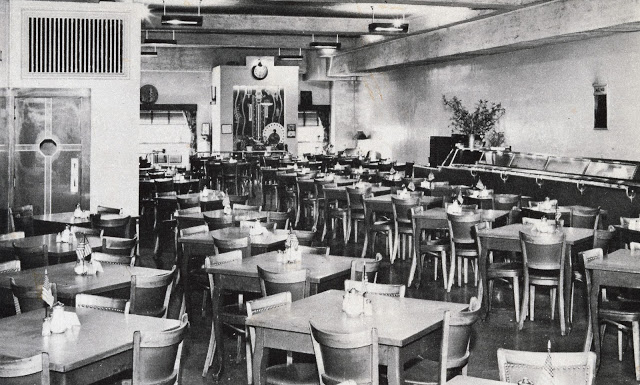 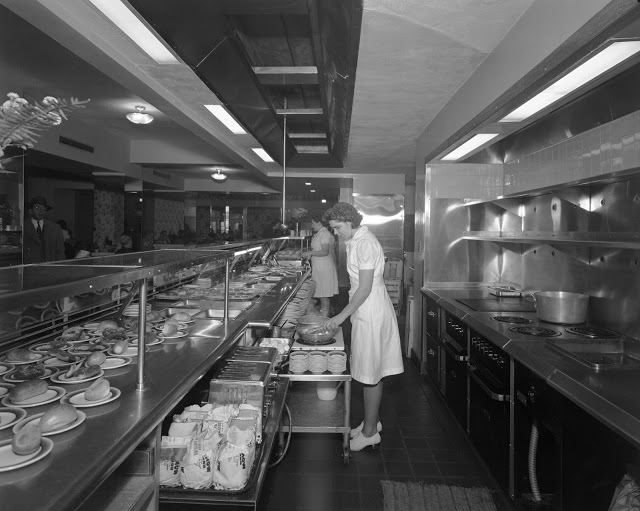 In the early 1940s, Evan Sholl’s business trajectory parted from Bill Marriott’s. Marriott continued to expand his business at every opportunity, building such a far-flung and sophisticated empire that it eventually had no time any more for the humble Hot Shoppes that had started it all. Evan Sholl ran a prosperous chain of cafeterias much like Hot Shoppes, but he didn’t want to go down the same path. “One morning, I got up and as I was putting on my shoes, I decided to quit, get rid of almost all of it,” Sholl later told the Washington Star. “I [didn’t] have time for my wife or anything. It [wasn’t] worth it.” Sholl also faced health issues at the time that may have influenced his decision. Whatever the reason, over the next several years Sholl sold off all but his original Connecticut Avenue shop, which he renovated and which continued to have lines out the door at lunchtime. 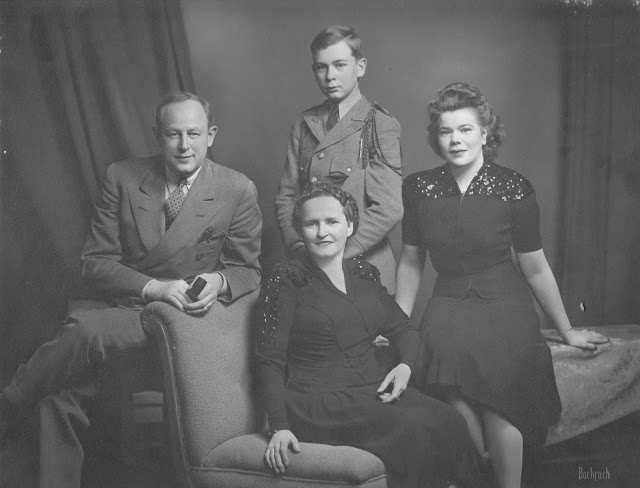 Evan and Gertrude Sholl and family (photo courtesy of Will Fleishell).

Sholl’s wife, the former Gertrude Fleishell, was a devout Catholic, and in time she made Sholl into a fervently religious man. Like his decision to cut back and focus on just one cafeteria, Sholl’s religious conversion in 1949 was supposedly a sudden event. As he later explained it to the Washington Post, “All of a sudden, holy mackerel, tears came to my eyes, I started smelling roses, and I began yelling, ‘I’m going to be a Catholic!’” Sholl called all his staff together for a meeting and told them that the cafeteria would be run differently; religion and patriotism were to be the new watchwords. While a few staff and patrons were turned off by the change, most stayed with Sholl and appreciated his drive and passion for giving. Soon little cards were placed on the tables with suggested texts for prayers of thanksgiving before meals. A framed prayer to St. Francis hung on the wall. And Sholl vowed to take only as much profit from the business as he needed for a living. He even deeded over his home to a Franciscan order. “I teach just one word,” Sholl told Landrum Bolling of the Saturday Evening Post in 1982. “That word is ‘give.'” 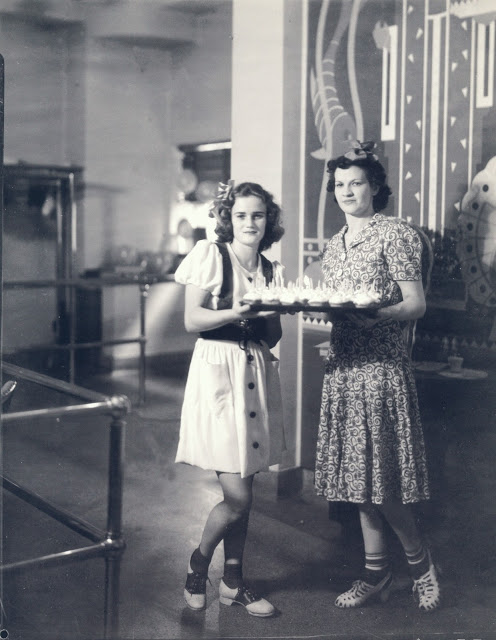 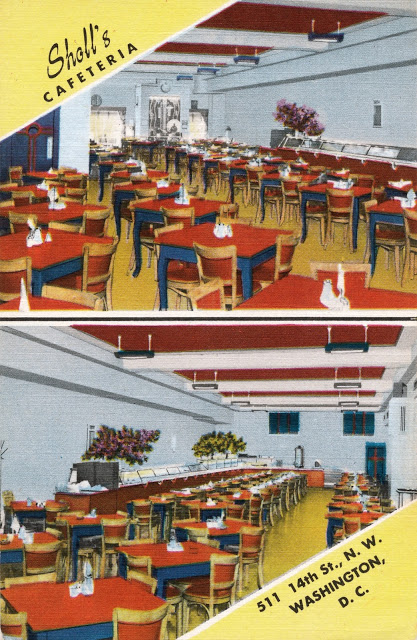 People loved Sholl’s, either because of its religious zeal or in spite of it, and the cafeteria was always busy. Employees, who were paid well above the prevailing wage level, were often fiercely loyal to Sholl and were known for their courtesy and helpfulness. In 1950, Sholl’s New Cafeteria opened at Vermont Avenue and K Street, NW, and it was also a great success. Both maintained a reputation for spotless decor, friendly service, and fresh food. Sholl’s two cafeterias were especially noted for their liver and onions, fresh doughnuts, and cherry and rhubarb pies. Like the city’s best diners and lunchrooms, Sholl’s welcomed all comers, ranging from celebrated VIPs to street people who couldn’t pay for their food. (Sholl gave away many meals to the poor.) Texas billionaire H.L. Hunt, known to be frugal, enjoyed eating at Sholl’s and loved the rhubarb pie. Presidents Harry S. Truman, Richard Nixon, and Jimmy Carter dined at Sholl’s, as did the city’s top judges, lawyers, lobbyists, and other business leaders, as well as many busloads of tourists hungry for a fast meal after a morning of museums. 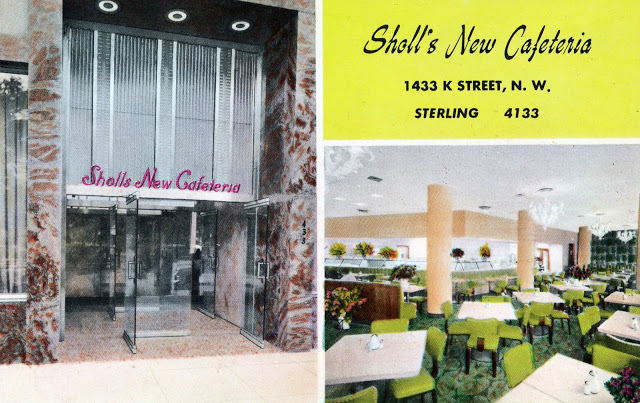 After Sholl passed away in 1983, his nephew George Fleishell took over and kept the cafeterias running for almost 20 more years. According to Will Fleishell, George gave the two eateries a broader international feel, welcoming tourists from all over the world. Still, the cafeteria format and home-style cuisine were beginning to fall out of fashion, and it would take Herculean efforts to keep Sholl’s going. Fleishell faced a variety of challenges. According to Will Fleishell, George was shot in the stomach one night after being robbed of the day’s proceeds as he walked along K Street, but he survived undaunted. By the late 1970s, his low-priced eateries with their slim profit margins struggled financially as downtown property values soared. In 1979, the original Sholl’s on Connecticut Avenue was forced to move when its home, the LaSalle Building (which also hosted Duke Zeibert’s restaurant) was slated to be torn down. The legendary cafeteria took up new quarters in basement space at 20th and K Streets NW. Then in 1984, the “New” Sholl’s at Vermont and K was likewise pushed out by extensive building renovations. After hosting former President Jimmy Carter and wife Rosalyn for a lunch of cottage cheese, fruit, and red gelatin salad in September, the New Cafeteria moved to Rosslyn, Virginia, where it lasted only a few years.

Meanwhile, the original Sholl’s, now at 20th and K, faced continued financial pressures. After it was threatened with a massive rent increase in 1999, a group of loyal supporters organized a “Save Our Sholl’s” campaign to keep the eatery going. The property owner relented, winning a temporary reprieve for the cafeteria. Nevertheless, times were changing. As had happened with the last surviving Hot Shoppes, Sholl’s most loyal supporters were elderly Washingtonians who had been patrons for years. Younger generations found the cafeteria format antiquated and the offerings unappealing. Tour buses grew less and less likely to book a stop at Sholl’s on the itineraries. Finally, after the attacks on September 11, 2001, patronage plummeted and Sholl’s was forced to shut down for good. Its closing was widely lamented. For many Washingtonians, Sholl’s had been a home away form home, one of the most enduring of DC’s 20th-century institutions, and one of the best places bar-none to get rhubarb pie.

Special thanks to Will Fleishell and Pat Fowler for their invaluable assistance. Additional sources for this article included John Mariani, America Eats Out (1991); Washington Board of Trade, The Book of Washington (1930); and numerous newspaper and magazine articles.

more stories
Previous
Sandovan Restaurant and Lounge Coming to Former RAS Space in Petworth
Next
What’s the Word on these old Buses in Bloomingdale?