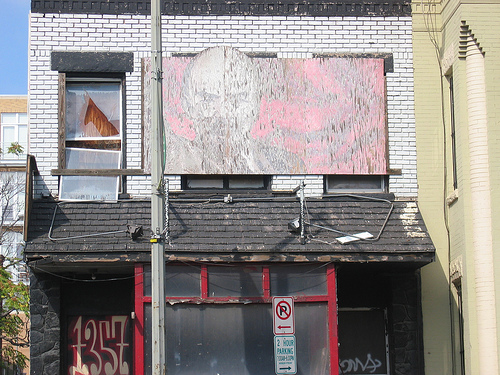 Any idea about what’s going on with the old State of the Union Building at 1357 U St?

Looks like there were plans 4 years ago to develop a swanky lounge. But I walk by it every day on the way to & from the metro and nothing positive seems to be happening there, and the “Kindred Lounge” web site from 2009 is no longer active. The building is still boarded up and still smells like pee pee. As it gets hotter, the smell is unbearable. It’s hard to imagine that, with so much development going on all around it, this building would sit blighted for so long.

But wait! Mystery! As of March, DCRA lists 1357 U as a Class 4 Blighted property, presumably the naughtiest of the classes. Curiously, although DCRA also lists it as unregistered, I couldn’t find it on any of the DCRA public auction lists for the past few years and there still seem to be realty signs on it, so clearly someone thinks they have it registered and are trying (albeit half-assed) to sell it.

Might anyone in PoPville know anything about this smelly eyesore?”