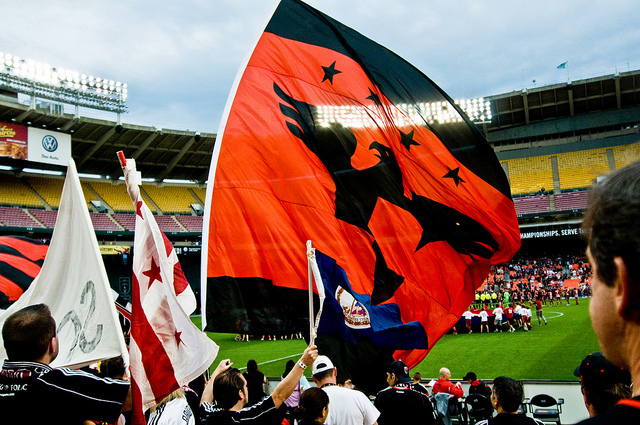 Today, Ward 6 Councilmember Tommy Wells released the following statement on the announcement that the District of Columbia and D.C. United Soccer have struck a tentative deal to keep the team in the city:

“I’m thrilled with the announcement to keep D.C. United at home right here in D.C.,” said Tommy Wells. “The Council spoke overwhelmingly in support of keeping D.C. United in the District of Columbia and urged the Mayor to work with stakeholders and ensure our soccer team remained in the District.”

On March 6, 2012, The Council approved the resolution, authored by Councilmember Wells and titled the “Sense of the Council in Support of D.C. United Soccer Remaining in the District of Columbia Resolution of 2012.” The resolution urged the city’s executive to develop strategies and proposals to keep the team in the District.

“The new stadium further solidifies our Anacostia Waterfront as a center for sports and culture – bridging our communities and bringing our city closer together,” added Wells.

Buzzard Point, the site of the proposed new soccer stadium, is located in Ward 6, in Southwest, along the Anacostia River.

You can see a map of the proposed site here.

“Today, Mayor Vincent C. Gray and the ownership group of four-time Major League Soccer (MLS) champion D.C. United announced the signing of a public-private partnership term sheet to build a 20,000-25,000-seat, world-class soccer stadium in the Buzzard Point area of Southwest. The new stadium, to be located adjacent to the Fort McNair Army base, will be bounded by Half Street and Second Street SW, between R and T Streets, is anticipated to be complete in time for the 2016 season.

The Mayor also announced that the deal anticipates a creative development plan, including a series of land swaps to support the approximately $300 million project and spur additional development without having an impact on the District’s debt cap.

Under the provisions of the term sheet, the District anticipates that it will swap District-owned property, including the Frank D. Reeves Center for Municipal Affairs, to assemble the stadium site parcels. The plan calls for Reeves Center tenants as well as District agencies currently in leased space to relocate to a new municipal facility in Anacostia near the intersection of Martin Luther King, Jr. Avenue and Good Hope Road SE. This facility would be developed and funded using a model similar to the District’s recently completed 200 Eye Street SE building.

“This is an exciting plan that moves the District forward in two areas about which I’m passionate — economic development, particularly in the East End of the District, and sports,” said Mayor Gray. “The new soccer stadium is the final piece in the Anacostia Waterfront Initiative puzzle that, when complete will create the most vibrant and sustainable sports-and-retail district in America.”

“We are proud to say that D.C. United has achieved a major milestone towards establishing a permanent, state-of-the-art home in Washington, D.C.,” said United managing partner Jason Levien. “This is a significant step forward, and we are going to continue to work diligently and collaboratively with the Mayor’s office and the D.C. Council to expedite this process and make this stadium a reality.”

There is not yet a finalized design for the proposed stadium. However, D.C. United officials unveiled multiple potential design concepts and are evaluating them as well as best practices with respect to soccer stadium design and operations in the United States and internationally.

The term sheet contains aggressive provisions, similar to those in the baseball stadium and school modernization programs, for the inclusion of District-based businesses in development contracts as well as local resident hiring goals for construction and operation of the stadium.

“This strategic agreement brings another anchor to the burgeoning sports-and-entertainment district along the riverfront area, while creating the climate for residential and commercial development in Anacostia that will hopefully replicate the success that the Reeves Center brought to the 14th Street corridor,” said City Administrator Allen Y. Lew, who previously led the development and construction of Nationals Park as the CEO of the D.C. Sports & Entertainment Commission.

“This aggressive plan really gets us where we want to go faster. Planned transportation projects like the new South Capitol Street Bridge and streetcar system will support the stadium and serve as inducements for additional investment on both sides of the Anacostia. We have worked with the community and will keep them involved every step of the way. In the next several years we will accelerate the development that has been envisioned for decades.”

The new municipal complex will adjoin another recently completed facility housing the DC Department of Housing and Community Development (DHCD) and include street-level retail and adjacent residential and parking components. The facility will provide approximately 200,000 gross square feet (GSF) of office space that could house agencies currently located in the Reeves Center or other agencies and accommodate nearly 850 employees.

The new facility will become an integral component of the retail and residential development plans already underway in Anacostia. Although Anacostia is seeing more private investment than it has in decades, the new building will be a prime catalyst for the CHASE (Congress Heights, Anacostia, and St. Elizabeth’s) plan, a collaborative effort between the District, residents, non-profit organizations and private interests looking at a range of topics including affordable housing, transportation, large-site redevelopment, and retail with a special emphasis on workforce development.

While the development plans and eventual stadium construction take shape over the next three years for the soccer stadium and Anacostia municipal center, officials from the District’s Department of General Services (DGS) will develop a relocation plan for tenants at Reeves as well as other District agencies that may be moved to the new Anacostia complex when it is complete. Every effort will be made to keep select tenants in the vicinity of Reeves for continuation of service to their target Ward 1 constituents.