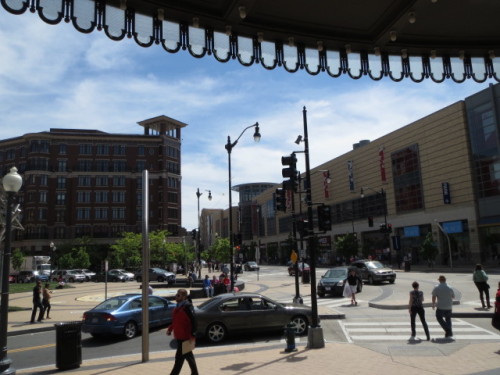 Dysfunction Junction chronicles the most forlorn, baffling, and wonderful crossroads of our fair city. Ben Ball is a transportation nerd in his spare time. He lives in LeDroit Park. Ben previously wrote about Dave Thomas Circle.

If this intersection is the beating heart of Columbia Heights, I’d say we’re heading for some sort of cardiac arrest.  The lovely plaza, complete with splash fountain for the kiddies, is a marvelous public space.  Surrounding it, however, is one of the most congested places for people and vehicles I can think of.

It is not easy to get through this area in a car.  The herringbone street pattern of northern Columbia Heights (a legacy of poor planning in the early part of the previous century) is a big part of the problem.  But in 2010, DDOT made it worse by redoing the traffic pattern at this intersection, where one of the few westward passages in the area crosses a major north-south corridor.

In the interests of “traffic calming”, DDOT altered the lane which allowed drivers heading southbound on 14th St to easily make a right turn onto Park Road.  Now traffic is so calm that it’s fallen asleep.  Just two years after DDOT worked its magic, a Metro study of the 50 buses found that traffic near 14th and Park averages less than ten miles per hour at all times of day. The study didn’t mention that the bus stop is part of the problem – buses frequently hang across both lanes, taking out both lanes of traffic in the process. 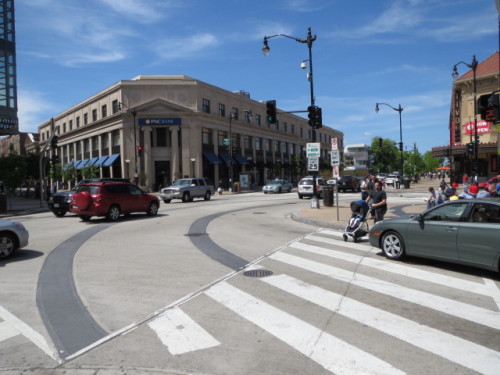 Another issue is that the traffic signals are terribly mis-timed, particularly for pedestrians.  More from that Metrobus study:  “Jaywalking [across 14th St] is a problem frequently observed at this intersection.”  I admit to being part of the problem here, mostly because the signals leave long stretches of inactivity where no cars are moving through the intersection and pedestrians are waiting to cross.

Why are the signals so off?  My theory is that left turns are the problem.  Giving drivers the option to turn left from Kenyon onto 14th or from 14th onto Park is what makes this intersection too complicated to manage – there are simply too many options.  If drivers were only allowed to pass straight through the intersection, the signal times would be a more straight-forward proposition. 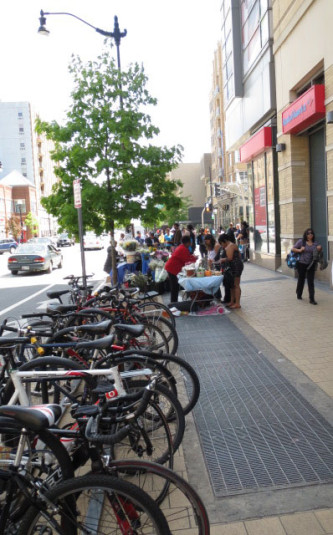 One more thing:  this whole area has more pedestrians than cars.  Even the wide sidewalks in front of DC USA are often impossible to navigate due to the crush of people.  (The sidewalk vendors who set up shop here don’t help – I’m looking at you, purveyors of “essential” oils, flowers, and schlocky art.)  It’s time to recognize that maintaining the flow of pedestrians through this area is just as important (if not more so) than maintaining the flow of vehicles.  Maybe we need a follow up ballad on this from some neighborhood troubadors?