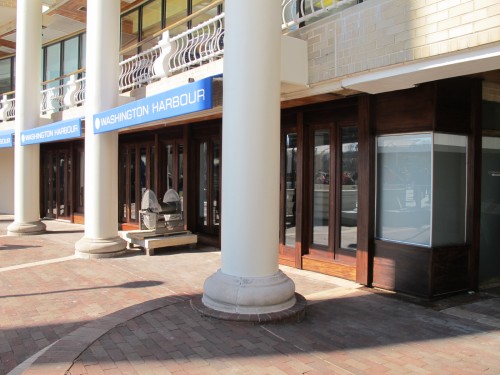 A couple weeks ago we learned that Fiola Mare had signed a 15 year lease for a space in Georgetown’s Washington Harbour. Lots more details now available from a press release:

James Beard Award Winning Chef Fabio Trabocchi announces his plans to open a seafood restaurant, Fiola Mare, in the Washington Harbour complex at 3050 K Street. Chef Trabocchi has longed to open a restaurant that would speak to the seafood memories of his youth near the Adriatic coast in Italy’s Le Marche region. Fiola Mare will be a 9,000 square-foot destination restaurant featuring impeccable ingredients sourced locally and abroad.

Trabocchi has been strengthening his relationships with fishmongers around the U.S. and Europe in anticipation of Fiola Mare’s opening by the end of this year. Trabocchi, who has been lauded for his affinity for fish, is creating a menu around three main areas of focus:

A raw bar providing small plates of Italian-style “susci”, including the finest selection of fish and shellfish antipasti, such as insalata frutti di mare, oysters, sea urchins and Maine lobster.

Light, yet luxurious seafood pastas and risottos, such as the Le Marche risotto with red Mediterranean imperial king prawns, Potato agnolotti with baby octopus and Linguini with local Rappahannock clams and basil.

A seafood counter that will serve as a centerpiece for the day’s fresh catch and a nexus to the open kitchen. Guests may order from the menu, or select their own fish directly from this seafood “market.”

The menu will also feature staples of Italian coastal cooking, including Trabocchi’s rendition of Adriatic seafood Brodetto and roasted branzino with artichokes and olives. Some of the whole fish preparations will be carved and served tableside.

Adjacent to the Georgetown Waterfront Park, Fiola Mare will offer valet parking, and feature a large outdoor patio overlooking the Potomac River, with views of the Kennedy Center and the Key Bridge from the 2,000 square-foot patio and windows. The vibrant and chic 20-seat bar will feature craft cocktails designed by Fiola Bar Manager and mixologist Jeff Faile. The wine program, headed by John Toigo who also oversees the wine list at Fiola, will spotlight seafood-friendly offerings, with selections from Italy, France, Spain and the United States.

Chef Trabocchi has tapped Georgetown-based HapstakDemetriou to transform what was previously an office space into a restaurant that could be at home along the Adriatic coast as well as on the Potomac.

Chef Fabio Trabocchi is the chef/owner of Fiola, a modern trattoria located in the heart of DC’s Penn Quarter neighborhood.