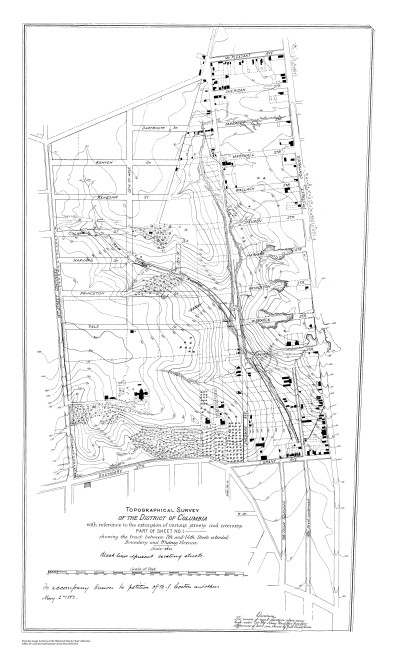 This week’s map comes from NOAA’s Office of Coast Survey. DC’s east-west roads north of the lettered streets follow an alphabetic pattern from south to north. Roads further south have two syllables (Euclid, Fairmont, Girard, etc.). Once the two-syllable roads end, we get 3-syllable alphabetical names (Allison, Buchanan, Crittenden, etc.). This wasn’t always the case, and does not always hold.

One aberration from the alphabetic pattern is Columbia Road, which runs through Columbia Heights. In 1882, instead of Fairmont and Girard streets, we had Yale, Princeton, Harvard and Columbia streets. Was Columbia Street (now Columbia Road) named after the Ivy League institution like its neighbors? Or was it named for Columbian College that occupied nearby Meridian Hill? Either way, Columbia Road remains today, splitting the alphabetically correct Harvard and Irving streets.

You may be surprised to find New Jersey Avenue cutting its way through Columbia Heights. According to this map, New Jersey Avenue extended up to Columbia Road between 13th and 14th. Need to get your bearings? Present-day Florida Avenue’s distinctive curve shows up at the bottom of the map in the form of Boundary Street.