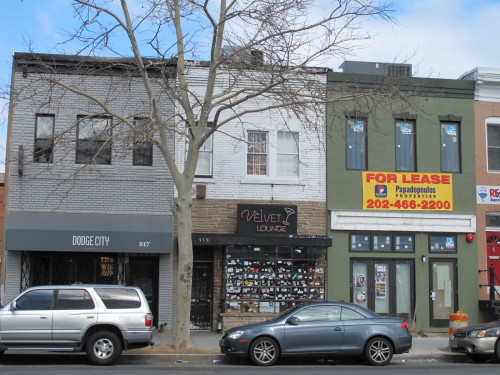 Back in 2011 we learned a restaurant was coming to the former Metrolab building that had been completed gutted at 913 U Street, NW. After little visible progress the past year a new for lease sign has gone up out front.

And while we’re on the block – a reader sends a heads up about some recent thefts at Velvet Lounge:

Two saturdays ago I was at Velvet Lounge. I had my purse on me the entire time, but had my jacket, with my keys in the pocket, hanging on one of the pegs on the wall. When I got home, no keys. At first I thought they might’ve fallen out but now I believe otherwise. Friday night, at Velvet Lounge, a group piled their stuff together on some chairs, including my friend’s purse (not the smartest, I know). Her wallet was taken out of her purse, $400 in credit card charges were incurred before she found out and canceled everything (obviously a short time span). That SAME NIGHT, another friend’s iphone was taken from her jacket at Velvet. I now think someone took the keys hoping a car key was on there.

Either a regular is there multiple nights a week stealing things or someone working there? I don’t know. But people should be aware.