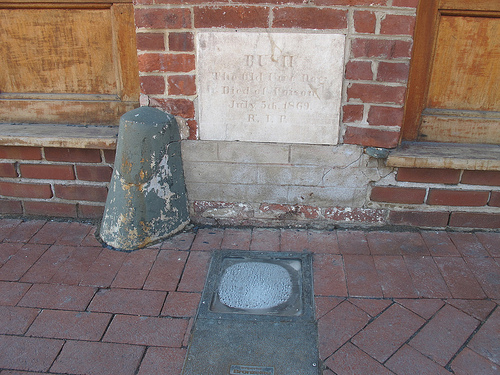 Really easy to walk by this one. It’s across the street from the closed Ruby space in Georgetown that we spoke about yesterday.

From Gutenberg.org A Portrait of Old George Town:

Someone who remembers him tells me that he was a collie, and that he went to every fire along with the engine. I think the men whose companion he was, and who evidently loved him when they inscribed the “R. I. P.,” must have believed, as I do, that like the Jim in the poem of that name by Nancy Byrd Turner, he would meet them joyously “on the other side.”

And from Wikipedia about the old Vigilant Firehouse:

A stone tablet sits at ground level between the two main doorways and reads “Bush, the Old Fire Dog, Died of Poison, July 5th 1869, R.I.P.” The story was related by Cassedy:

Bush was of mixed breed, of dark brown color, a volunteer of Fire Co. No. 1. He ran with the engine to all fires and parades and was a general favorite with all who chanced to form his acquaintance. He became careless about his diet, ate free lunch between meals and was taken suddenly ill July 4, 1869. The doctors pronounced it a hopeless case of arsenical poisoning, and after several severe spasms he passed peacefully in the sixth year of his age. 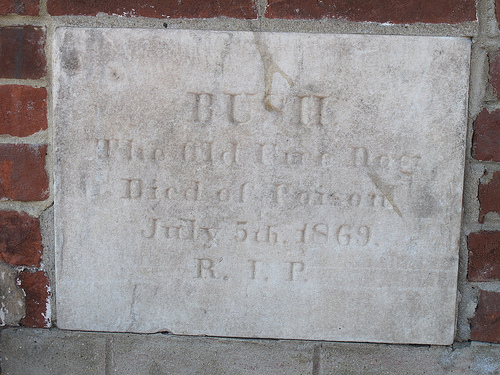