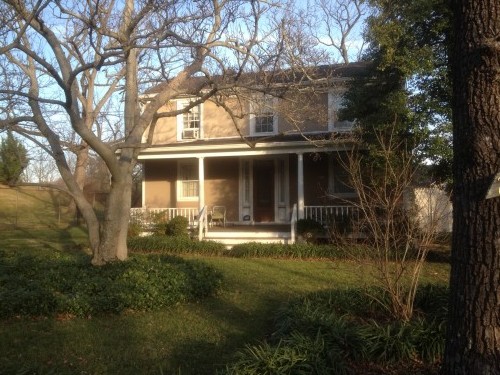 Thanks to Susie from Palisades-DC for sharing:

There is a “new house” sign from Pollin Construction on the old Shugrue property. It is likely that the house will soon be razed to make way for another mansion. Located on Foxhall Road just south of the Field School, it is one of the oldest farmhouses in Palisades.

The Shugrue and Malone families operated a dairy farm for about 150 years in the 19th and 20th centuries, using for pasture the land currently occupied by the Mt. Vernon/GW campus. (They donated the land to Our Lady of Victory Church on MacArthur Blvd.) As I understand it, they grazed their herds from as far east as Georgetown along Que Street to as far west of the Wells Fargo location at Arizona and Macarthur Blvd.

This house was the Shugrue family home, and until August 2012 was occupied by Sylvia K. Shugrue an award winning science teacher…and in whose name a grant was established for teachers who create an interdisciplinary lesson plan through the National Science Teachers Association.

Sylvia was known to say upon departing, “See you in the Funnies.”