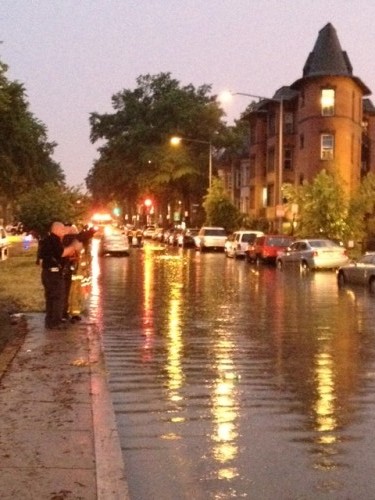 Congresswoman Eleanor Holmes Norton (D-DC) today sent a letter to President Obama requesting $40 million to cover the city’s emergency construction of storm water storage tanks at the McMillan Reservoir, in addition to a $15 million installment to partially fund the District’s Clean Rivers Project. The extra $40 million is to alleviate the flooding that has plagued the Bloomingdale and LeDroit Park neighborhoods in the District.

In her letter, Norton stressed the urgency of addressing the inadequate capacity of the city’s federally constructed combined sewer system, which has caused significant property damage and hardship for District residents this past year, noting that the city’s sewer systems also are necessary for the functioning of the federal government. Norton further wrote that “residents living in the Bloomingdale and LeDroit Park neighborhoods in the District suffered repeated and severe damage to their homes, including sewage backing up into houses as a result of intense rainfalls, which also flooded city roads…. The flooding is the result of insufficient capacity in the Northeast Boundary Trunk Sewer (NEBTS), which was constructed by the federal government in the late 1800s. Capacity limitations for this sewer were documented soon after it was built, but no substantive action was taken.”

Concerned with the devastating effects of the limited capacity of D.C.’s combined sewer system on our waterways, Norton has successfully pressed for annual federal funds for the city’s $2.6 billion Clean Rivers Project to eliminate combined sewer overflows into the Anacostia and Potomac rivers and Rock Creek, including $15 million in fiscal year 2012. However, she said that this project will not address quickly enough the flooding in the Bloomingdale and LeDroit Park neighborhoods, and funds to keep further damage to homes and businesses are essential. Norton said, “Local and federal ratepayers will bear the bulk of the burden for these projects, but federal payments to help offset that burden are necessary because of the scope of the project.”