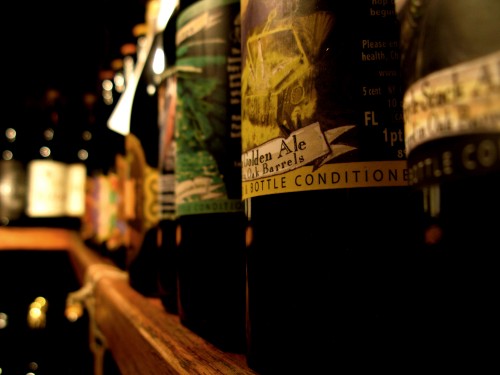 Jack Van Paepeghem works at Meridian Pint and is a Certified Cicerone® You can read his previous post about travels in Sea Change Pale Ale here.

Last time we talked it was about drinking beer fresh and enjoying all those bright green, resiny, juicy, citrusy hops as if they were right off the bine. By all means, continue to drink your IPA’s, pales and other bitter bombs as soon as possible, but how about we celebrate the New Year with some old beers. Old, in this sense refers not to the stale, mistreated, and outdated ones, but beers that have been carefully put down with age and ready for consumption and true appreciation. The idea of a “new” or another year may have some worried as their days are numbered, but for beer, it can be quite the opposite. I want to address the question of why and how we should age beer, and when it is best for consumption.

So first off, if brewers have complete control over their ingredients, process, and final product, why shouldn’t we just drink their beers when they are released instead of aging them? This question has a couple leads. First, when we consider a beer as “fresh” it is also implied that a beer is made ready to drink. Several breweries may have a product ready for sale but instead choose to either hold the beer in bottles, barrels, stainless steel tanks, or other mediums so the beer may have time to come together and for higher alcohols to settle out. For example, the original IPA’s of Great Brittan were aged in wood barrels for up to a year before they were released to the public because they were so harsh and bitter that nobody would’ve cared for them “fresh.” Otherwise, brewers intend on creating beers which have favorable characteristics both when fresh and when aged. One of my favorites is Sierra Nevada’s Bigfoot Barleywine (that should be hitting the market any day now) which has a juicy, citrusy, piney hop aroma and flavor with a biting bitterness, but as they beer gets a couple years on it, the hops fade and the caramel and toffee malt flavors develop into something complex and warming.

This then begs the question of which beers are worth aging and which are potentially better fresh? In all honesty, it depends on each particular beer and the individual tastes of who is aging it, but one can apply the following guidelines:

-Look for beers with an ABV of 8% or higher. Alcohol is a natural preservative and keeps a potentially perishable product intact and helps the maturation process over time. Beers which do not follow this rule of thumb are generally Belgian Lambics and Gueuzes which are around 6% but contain live yeast and are bottle conditioned.

-Beers which are bottle conditioned contain living yeast in the bottle (whether capped or corked) which continue to ferment and develop flavors. Those ales made with Belgian yeast strains as well as wild yeast strain are perfect candidates for aging.

-Beers which have already undergone aging and/or fermentation in say bourbon or wine barrels can further benefit with time, as burnt oak or tannic flavors may develop and intensify or recede over time, depending on the beer.

-Many breweries produce “anniversary” or “reserve” beers which imply a special designation of a beer that is generally meant for aging and comparison against prior years.

-This ties in with the idea of having a “vertical” tasting, which is to say, a tasting of one particular beer from several different years. However, some breweries change up their particular “vertical” beers from year to year, but are still worth trying against one another.

-In general, look for styles which are all around “bigger” beers: think imperial stouts, barleywines, Belgian strong golden or dark ales, even double IPA’s with a large malt bill pick up an interesting character as hops subside. You probably get the picture. But also, don’t be afraid to throw an oddball or two into the mix, you never know what can turn out incredible 3 years down the road.

When cellaring beer, it is best to buy more than one of each beer that you are putting down in order to try it at different stages to determine its optimal condition for drinking. Again, each beer will have its nuances and evolve differently, but there are certain characteristics which can be expected with aging:

-Higher fusel alcoholic flavors and aromas (think nail polish remover) which were once considered “hot” become subdued and the alcohol becomes pleasantly warming. This is especially helpful for barleywines, old ales, and strong ales which are 12% and above.

-Upfront hop bitterness, flavor, and aroma will fade, but can transform and work with the malt and yeast character over time. Highly/over-hopped beers may benefit with a few months, even years. Dogfish Head 120 Minute, a hop-driven beer, is extra hot, astringent, and aggressive at first, but aged versions are reborn with an amazing barleywine-like character.

-No matter the strength of a seal, whether cork, cap, wax, or steel, all beers will become oxidized over time. This means that oxygen left in the bottle or keg, or that which enters in will transform what beer it is coming into contact with. Positive oxidation occurs when a beer picks up deep sherry or madeira-like notes whereas oxidation can leave some beers tasting like wet, stale, cardboard or paper. You will never forget this flavor once you’ve had it in high concentrations.

-Due to the conditions of a beer over the course of its life, the yeast may become overworked or just simply die out. This process is called autolysis and can leave a beer tasting meaty and like soy sauce. In some beers like old ales or imperial stouts this brings out the “umami” or savory character while in others it can overwhelm and spoil an otherwise great product.

-Sour ales may get sourer just as those beers with significant funk may keep on getting funkier, sometimes they become more nuanced, subtle, and smoothed out, but other times they may just die out completely. Some non-sour beers may even pick up a sour (sometimes desirable) or infected character (always undesirable) depending on the conditions of cellaring.

I hope by now you’ve become intrigued enough to start your own cellar, so you can subject your favorite beers to the test of time and reward your own patience with something worthy of transcendence. Building a cellar with proper temperature and humidity controls takes a huge investment of time and money, but there are other ways you can do this at home which can yield similar results when you keep certain things in check:

-Find a place where your beer can be out of sight and of mind. Do not keep a stash of tempting beers by places like your desk or bed where you are likely to stick them into the fridge for consumption. Keep inventory so you know what has been where and for how long. Patience is of the essence.

-The darker the space, the better. UV rays contribute to skunking of hops in beer which can absolutely ruin an aged beer. Be especially careful as many Belgian ales come in green glass bottles which are more susceptible to skunking than brown bottles.

-Find a place where you can maintain a relatively constant temperature of 55 degrees. Just as refrigeration slows the aging of beer, overtly hot or cold and fluctuating temperatures can have extremely harmful effects on beer.

-DC is known for its nasty levels of humidity, especially in the summer. If possible, find a place with a humidity content of 50%-70%. This prevents corks from drying out and prevents the onset of bacterial growth. Dehumidifiers are relatively inexpensive and exist for this purpose. On my trip to Belgium this past October, I ordered a 2005 De Dolle Stille Nacht Riserva from the Kulminator in Antwerp. The bottle was covered in mold and other brown and green growth which felt wet to touch, rustic perhaps? Hell no, the beer was tainted with mold and almost made me physically ill. Don’t let this happen to your bottles. Check periodically and remove any residual mold from the exterior.

-Lastly, and while up for debate, store your bottles upright. This reduces the surface area of exposed oxygen in a bottle, allows yeast to settle naturally at the bottom, and prevents yeast build up around the neck or top of a bottle.

The time has come to sample your labor of love. The rule of thumb is to serve beers at the temperature at which they are cellared. However, beers lighter in alcohol or those which benefit at a slightly colder temperature (Belgian Triples, Gueuzes, for example) can be refrigerated before serving. Do not disturb the yeast while pouring (avoid shaking the bottle back and forth between glasses), and don’t rush. Yes, like wine, beer too opens up and transforms as it warms. Give it some time, appreciate, and enjoy. Sometimes you will truly have a profound experience with aged beers.

There are plenty of bottle shops around D.C. from which you can buy beers worth cellaring. It is a seriously rewarding aspect of drinking beer and the winter months are the perfect time to break out these kinds of beers. Can’t wait for your own treasures to age? Stop by the Pint on Tuesday, January 8th for our “Old and Sour” event where we will be pouring 12 aged kegs from our temperature/humidity controlled cellar (some of which being over two years old at this point) alongside 12 tart, funky, and sour beers starting at 3pm. I got a chance to have a sneak peak at some of the beers we are pouring, and while I won’t tell you what they were, I will say that some were expectedly awesome while some took on completely unanticipated and remarkable flavors and characters.