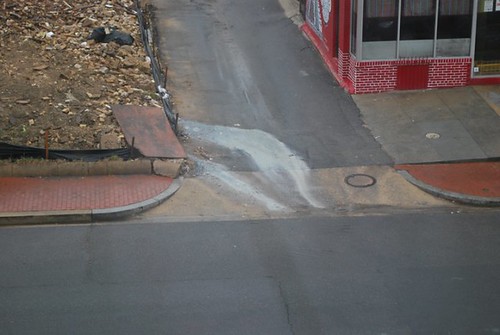 Day and night, raw sewage seeps from a recently demolished building into an alley on the 800 block of Kennedy Street, NW, in Brightwood Park, causing the foulest stench to fill the air. This has been occurring nonstop since JANUARY. The unmistakable smell of sewage can be smelled all the way to 9th and Kennedy. While Council-member Bowser’s office has been helpful in trying to pressure the city to rectify this problem, it has gone on for far too long. Exposure to raw sewage has health risks that the city has not addressed with so much as a sign. I witness children and adults walk through this spill every day, not knowing what it is.

DCMud reported in January 2009 that 809 Kennedy NW was set for demolition: http://dcmud.blogspot.com/2009/01/brightwood-tenement-set-for-demolition.html

New System Demolition and Excavation was reported to carry out the demolition.

New System Demolition and Excavation said that the owner of the building had been fined and it was their responsibility to clean and fix the issue — the owners did not pay NSDE what they are owed, so the city (DCRA) will be rolling out some sort of bidding process to get contractors to complete the work.

I spoke to the owners of several Kennedy Street businesses on Tuesday, March 24. One in particular said that his business had been damaged by fewer customers coming in to his restaurant due to the stench adjacent to his establishment. There is also a nagging feeling that our community is being ignored because it has a largely Spanish speaking, immigrant population.

On Wednesday, March 24, I made phone calls to the DC Department of the Environment, where I was referred to Bob Emwanta, and later to Sylvester Mode (pronounced moe-DAY) where I left a message.

I then made a phone call to Chris Davis at the Mayor’s Office of Community Relations and Services, who said that he was currently awaiting a response from WASA on the matter. He, too, had experienced the stench first-hand after his office conducted “Operation Fix-It” in the community. I asked him to keep Robert Idlett from my councilwoman’s office in the loop as well.

And still the stench fills our block.” 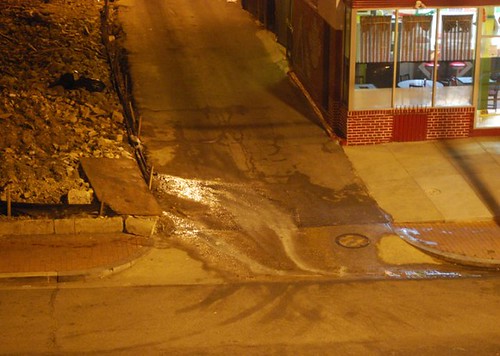 Wow, this is completely unacceptable. Which agency should be pressured to get this fixed immediately?