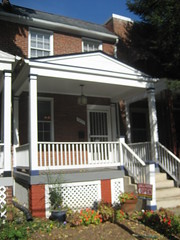 Seller Subsidy: $0. in both cases

Bank Owned?: No and No

Type Of Financing: Conventional conforming ($417k or less financed) in both cases

I know, I did Mount Pleasant last week for Good Deal or Not Revisited (GDoN-R), but there were some issues with the formatting for the ten years of data I compiled, so I thought I’d try again. These two houses were one block from each other, and both on the smallish side, neither with central air, and both ultimately priced the same. Comments on both original GDoN posts complained about the size of both properties and debated the desirability of the location.

What I tried to post last week was a ten year overview of sales data for houses (did not include condos) in Mount Pleasant. The data is not surprising but I think it shows an interesting overall perspective. We see a peak in average sales price in 2005, and as recently as 2007, the average sale was above list price. In 2008, Buyers had a little bit more negotiating room as the average property sold approximately 7% below list price. 2009 Buyers didn’t get to negotiate as much, but it looks like Sellers became somewhat more accommodating in their pricing, since the average sale price was down more than $20,000. Click here to see the report.