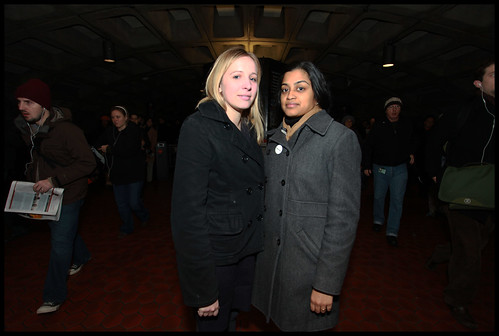 Shannon – “When I moved here from Atlanta and started taking public transportation and walking around the city, I faced gender based public sexual harassment at least once a day. It was really scary. Last fall, I decided to do something about it and I took the advocacy training program at the D.C. Rape Crisis Center. That’s where I met Chai. We started talking about street harassment and realized that there was no venue in D.C. for people to talk about these issues. A lot of people don’t know that D.C. has one of the highest rates of gender based violence in the country. We wanted to bring people together to think about community solutions to the problem of harassment.

“We were really inspired by Emily May who started Holla Back in New York. Her blog’s aim was to create a forum for women to share stories about harassment. We contacted her and she shared her model and the name with us. We set up Holla Back DC! as a place for people to share their stories about harassment in D.C. We also offer workshops and training on street harassment for women and those in the lesbian, gay, bisexual, transgender and queer (LGBTQ) community. We believe in addressing the roots of this problem so we are doing youth outreach, too. Now, we are working to bring RightRides to D.C., which provides free rides to women and those in the LGBTQ communities on Friday and Saturday nights. We are also working with businesses to develop safe streets and safe stores where the staff are trained in dealing with street harassment and it is just a safe place for one to get away from a harasser.”

Chai – “We recognize that the medium that we use is not accessible to all individuals who are victims to this kind of harassment. Now, a lot of the stories that people share are from Northwest, but that does not mean that it is confined to that quadrant. We know it happens everywhere. We are trying to engage the victims, harassers and bystanders all around the city to better understand the problem in D.C. and work together towards a solution. Still today, a lot of folks don’t know that it’s not cool to catcall a woman. We get a lot of people telling us that harassment is the cost of living in the city. But, we see it happen in rural areas, too. Regardless of where someone lives or her socioeconomic status, a woman can feel disempowered when somebody says to her, ‘Hey baby, I want to have sex with you tonight!’ People change their walking routes and talk about how they feel differently about themselves when they are harassed.

“Look, we’re not trying to say that if it is consensual and both parties are cool with it, it is wrong. For example, a highlighted wedding story in one of the Washington newspapers this summer talked about a man who met his wife by hollering at her on the street. He said, ‘Keep doing that catwalk!’ She said, ‘Oh, you like it?’ That is literally the way it was written. It was street harassment that turned into dating then marriage. Again, we are not here to judge, but a lot of people may have been offended or scared by comments like that. While few individuals end up in loving relationships due to street harassment beginnings, the vast majority are unsuccessful and offensive to women. Some men write into our blog and say that street harassment is just a natural part of the male evolution and they can’t help themselves. My response is that given how unsuccessful of a practice it is, it should have died out through the basic laws of evolution long ago!”