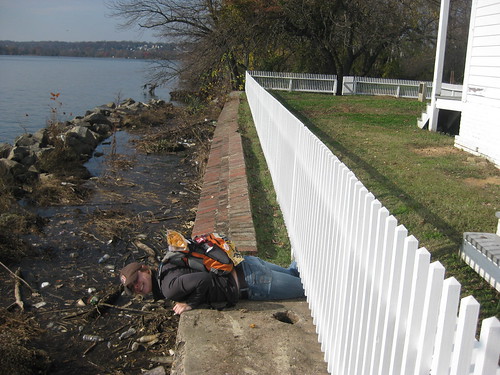 On Sunday, November 22, after a two-month hiatus, we resumed our trek around the DC border. We stuck to the original boundary, which adheres to Article I, Section 8, Clause 12 of the U.S. Constitution, setting aside a 10 mile square for the nation’s capital (so said one of the historic marker signs, though it seems to actually be Clause 17: http://www.house.gov/house/Constitution/Constitution.html). Having already covered the NE and SE quadrants, this time we found ourselves covering the SW perimeter, technically Virginia these days. The land south of the Potomac used to belong to Virginia, became part of DC following the Revolutionary War, and was returned to Virginia by Congress in 1846.

Because the SW boundary is no longer a DC border, this was not the most “as the crow flies” walk. However, King St. functioned somewhat as our guiding road, as Eastern Ave. did for the NE border and Southern Ave. did in SE.

The trek started out on a decisive high point, as the first stone is tucked in the middle of the retaining seawall of the Jones Point Lighthouse. The stone is much more interesting than the dinky lighthouse, and can either be viewed through a round hole bored through the top of the wall, or by lying on one’s belly, hanging over the edge, and peering at the stone upside down through a gate. 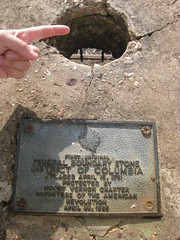 What sets these ten stones apart from the other quadrants is the signage. Virginia loves to surround its boundary stones with signs. Although most of the stones were not in their original locations, had been hit by cars, and/or run over by plows, the plaques for each stone were much better preserved than on our previous two walks. Winning the title of cheesiest sign on the walk and hung next to a stone in a school parking lot, a groan-worthy saying contrasts Arlington’s old limits with its students’ boundless horizons. 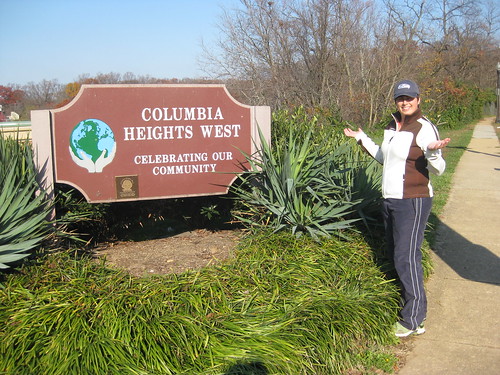 Stay tuned for the final quadrant, and a special guest trekker- PoP!

– At a couple points throughout the walk, we saw signs for the Virginia Bird and Wildlife trails. Curiously, the signs feature a picture of a mountain, a bird, and a bear. We ask you: How many wild bears are there in NoVa? And why willingly take a stroll along a path with prominent advertisements for bears?

– Despite the prolific signage, SW-9 is the only stone that dons an official “National Historic Landmark” marker, although they are all federal monuments. The sign reads, “This site possesses national significance in commemorating the history of the United States of America.” – 1980, Heritage Conservation and Recreation Service, United States Department of the Interior

– This quadrant proved to have the most quaint houses and neighborhoods and didn’t make us play frogger across any highways. However, we did have to walk on a sidewalk set in the median of a busy road, and one of the stones was even set in a median!

Stones found: All 10!
Times children screamed “Jesus loves you!” out their car window at us: 1
VA Bird and Wildlife Trail signs (with bears on them): 2
Discarded mattresses: 0
American flags on houses: too many to count 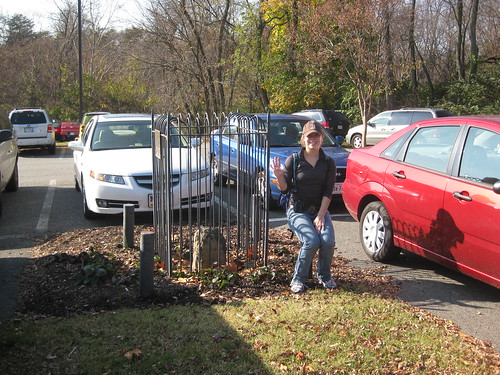