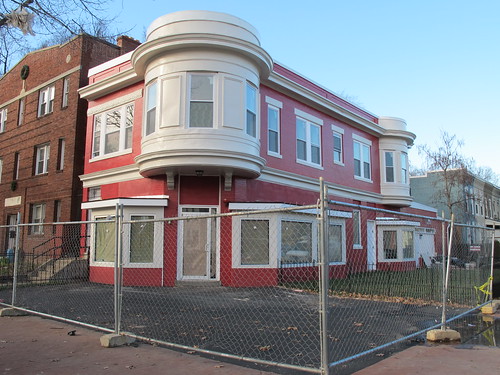 Last week a commenter mentioned that they were really looking forward to the coffee shop going in at 3rd and P Streets, NW. I have to admit I had never heard of that possibility. So I walked by the area last weekend and spoke to a few neighbors. They told me that they had read online that it was either going to become a coffee shop or wine store with a Georgian community center on the second floor. I finally found where they read that – on the Bates Area Civic Association Web site. From August:

“Mamuka Tsereteli spoke on his plans as owner of the commercial property at the NW corner of 3rd and P St NW. The first floor is zoned for commercial use and second floor for residential. He envisions a wine store or market store. He said he is renovating the property currently, which should be complete in the next two months. He said his intentions were to use the space upstairs to hold cultural events related to the country of Georgia, like art shows, musical performances.

He said he came to hear from the community what they would like in the space downstairs. Ultimately, he will be leasing the space out to another business.”

The neighbors I spoke with said they’d much prefer a coffee shop to a wine shop but are excited about the progress on the building. It is looking good. I’ll be sure to update as more info becomes available.