Just saw this from MPD:

“On November 13, 2009, at approximately 2200 hours, an accident occurred at 13th & Girard Streets, NW. The driver in this case struck a total of 6 cars, including four parked cars and two that were occupied. The driver of the striking vehicle suffered a broken leg and one other person was taken to the hospital with non-life threatening injuries. It was discovered that the striking vehicle was stolen and the driver of that vehicle, a 15-year old male, was apprehended and placed under arrest for a number of felony and traffic charges.

These incidents sadly seem to be relatively common on 13th Street.

On a related note when I did a quick search of 13th and Girard I found this great historical photo from Flickr User rockcreek: 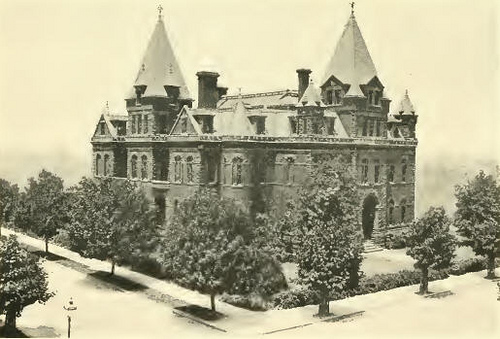 “A slightly blurry shot of the Army and Navy Academy – a prep school – at 13th and Girard (then Princeton) Streets, NW. From A Statement of Some of Advantages of Beautiful Columbia Heights (1904).”