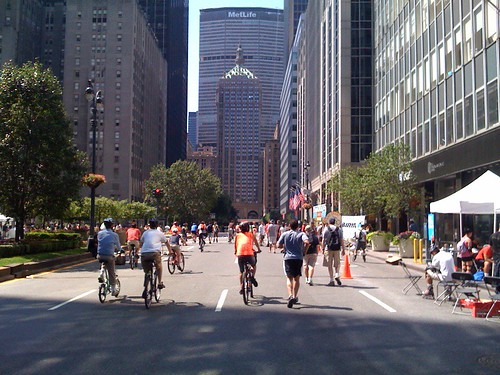 I recently read about NYC’s Summer Streets event, where the NYC DOT completely closes Park Avenue from Central Park to the Brooklyn Bridge to automobile traffic for three Saturdays during August. It allows walkers, runners, and bikers to have complete use of several miles of Park Avenue without having to worry about cars getting in the way. It looks and sounds like a great idea. I’m curious to ask your readers if this concept might work in DC, and which street they think would be a good one to close…while not screwing up automobile traffic around the city too much. My suggestion is P Street, from Wisconsin Ave all the way to North Capital St, because it traverses many neighborhoods and is not too hilly. Although the two circles it intersects could pose a problem. What do you think? A link is below:

What a cool program. I definitely think it could work in DC. If they can close Park Avenue in NYC then we could def. close a street for a few days on the weekend over the summer. I think P Street is a great recommendation. I think they could also probably do U Street from 18th to 7th Street, NW. I actually think it would be cool if they did Pennsylvania Ave from the Capitol to the White House. What do you guys think?