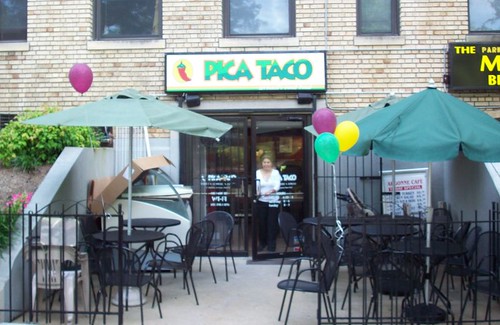 The previously discussed Argonne Cafe (http://www.princeofpetworth.com/2009/04/judging-cafes/)  seems to have disappeared, but in it’s place has sprung up Pica Taco.

Looks like they may have just opened today. Was told the menu is still a “rough draft” and would probably change some – but it includes various Tacos ($2.00 each) and Burritos ($4.50 to $6.50).  They also seem to have kept some of Argonne Cafe’s items – there’s a breakfast selection that looks kind of familiar.

Most interesting part – sounds like they may have Ceviche on the weekends. No word on price yet, but we were told to check back.

Hours run until 8pm weeknights according to the door, and they’re open all day Saturday.

Didn’t try the food, since we had just eaten, but I will admit to being kind of excited about this being around the corner from my front door.”