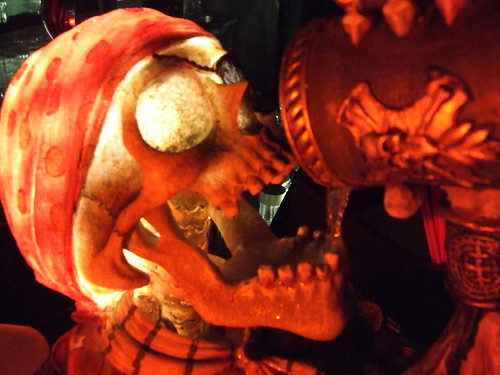 Robyn returns with a new series, Random DC Summer Outings. If you have any suggestions please email princeofpetworth(at)gmail(dot)com

When at Piratz Tavern, a place themed after all things piratey (the Johnny Depp kind, not the Somalian tween kind), do as Pirates do. I ordered, took a sip, and figured out exactly what was in grog: dark rum mixed with more rum, splash of ginger beer, maybe cough syrup/WD40, topped off with rum.

I heard about this place through a random rumor (“supposedly there’s this bar in Maryland where you can drink grog and sing about it at the same time”), but didn’t actually believe it existed. I mean, are Pirates still cool enough to sustain a restaurant? Are they the pioneers behind the next genre of food? Will it be worked into our food vernacular as in on a lazy Friday night when deciding where to eat I will turn to my friend and say something like “where do you want to eat tonight? There’s the Italian joint, I could go for Indian, or what do you think about Pirate?”

I hope so. Because Piratz Tavern is shamelessly cool. A mishmash of unburied treasure line the walls and the bartenders have tattoos, nicotine teeth, dangly earrings and scowls. What makes them cool is that these people really are pirates. The waitress – who I was amazed could breathe or see above her hoisted chest in that corset – is part of a pirate troupe that plays music on the back patio. By music I mean wonderfully raunchy songs that delve deep into pirate vulgarity. And if you don’t raise your grog glass when they tell you to, they put you as the butt of the joke in their next song about an unfortunately impotent pirate or unfortunate looking wench.

As for the moderately-priced seafaring menu –thai mussels are good, as is jerk chicken sandwich. Don’t drink more than 1 mug of grog if you want to be able to stand up, though they’ll encourage you to keep ordering to develop a tolerance only a real Pirate could have.