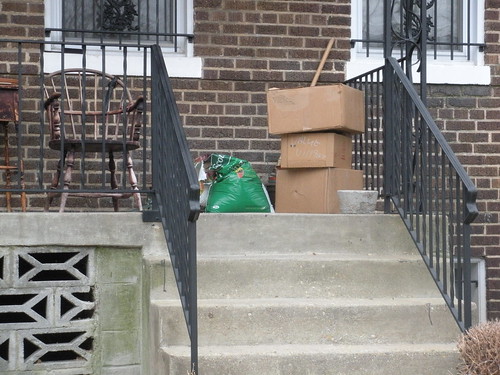 On the Columbia Heights Listserv I’ve received a number of notices of packages being stolen. Below is a sampling:

“Fed Ex envelope taken from my mailbox with valuable content.” (1300 block of Monroe)

“I also had a package stolen from 700 block of Harvard … gotta get signature delivery/do not drop instructions for everything now I guess.”

From the 1300 block of Euclid (the following has been slightly edited):

“A middle-aged woman in a blue knit cap came up the walk with a box of pills in her hand and walked to the buzzer confidently. She dialed a number on the intercom, let it ring, and stood out of line of the camera. We then asked her if she knew someone in the building or if she was dialing someone in particular. She told us she was here to deliver pills (in a MTWThFSSu box) to Mr. Baker. We told her that there was no Mr. Baker in the building, and that she may be looking for someone else in another building next door or two doors down. She talked to us, not leaving the front stoop.

We explained that we had had packages stolen from the building, and that she fit the description of the person who was seen stealing packages in the neighborhood, and that if she didn’t leave the area we would call the police. At that point, she walked down the steps to the building next door (east), but kept going (east) to the next building as the street was busy.

We tried to snap a picture as she left and we have a picture of her back, but not of her face, and it is not very clear.

This is a reminder to keep an eye out for her, and to request that couriers deliver directly to your door and out of sight, rather than leave them at the table in the lobby.”

If you don’t have a lobby, what do you guys do when packages get delivered? A friend of mine always has them delivered to work.