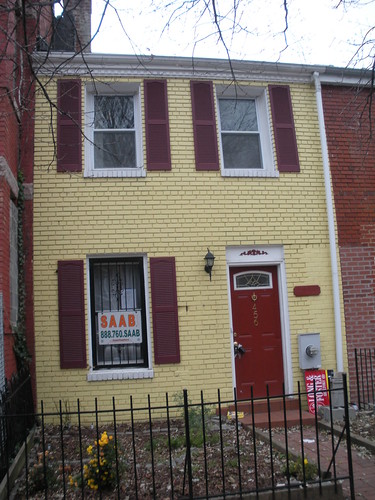 DSCN5022, originally uploaded by Prince of Petworth.
In real life, hipchickindc is licensed as a real estate broker in the District of Columbia and Virginia, and as a real estate salesperson in Maryland. Unless specifically noted, neither she nor the company that she is affiliated with represented any of the parties or were directly involved in the transaction reported below. Unless otherwise noted, the source of information is Metropolitan Regional Information Systems (MRIS), which is the local multiple listing system. Information is deemed reliable but not guaranteed.

Recent Purchase and Re-Sale?: Well, let’s say recent purchase and didn’t go so well…Last transaction on the books was for a sale at $425,000. in February 2007

Despite having been immediately blasted last week by an anonymous poster for being, “God, you are such a realtor” for saying last week’s GDoN-R was a good deal, I am, without reservation, calling this week’s GDoN-R, a Good Deal. (And yes, I am a card carrying member of the National Association of Realtors.)

I have actual firsthand knowledge of this property. I’ve been in it several times and represented a Purchaser in writing an offer back in December. The listing agent was inundated with ten offers on this property and my client didn’t win the bid. This was a rare find being listed under $300k, in quite livable condition, and within blocks of Metro, the Sexy Safeway, Chinatown, and Penn Quarter.

The property re-surfaced back in early February when the previous contract holder backed out. Having spent the interim looking at everything else was available in that price range, my client decided it made sense to go after the property more aggressively this time and we wrote a much higher offer. Again, it drew multiple offers and this time it looked like we were at the top of the pile. At the last minute, however, another one came in and bumped us out.

That client is happily under contract on another property, however, he’ll be doing a lot more work than he would have had to with this one.