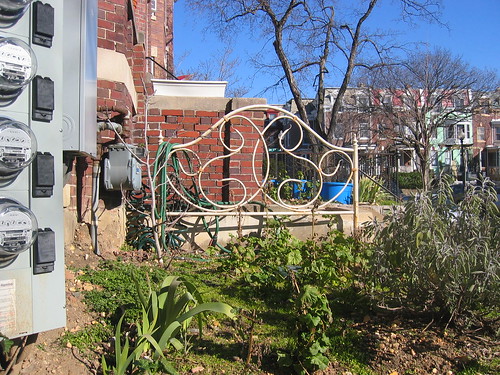 “I’ve told you before about our crazy landlord (didn’t fix the washer for 9 months, outright refuses to fix other things, and is the infamous “artist” of the front yard headboard hose holder that was featured in a past Photo Archives Caption Contest). Well, now she’s evicting us. She’s evicting us because although she hasn’t repaired any other single thing in the building in a timely manner, she’s decided that she must replace the pipes in our kitchen, NOW. I’ve been trying to navigate the various DC rental and legal aid agencies to figure out what our rights are, but in the end, we’re thinking it might be best just to get out, as much as it pains us.

It pains us more because we are hoping to move back to California in the next year, which means signing a 1 year lease elsewhere is not smart. Ideally we would find a month-to-month lease situation or 3 month lease that goes month-to-month thereafter. We have no idea how long it will take to get jobs in this economy, but we would really *like* to be there by summer. I’ve been looking for sublets and lease transfers but there’s really not much out there that meets our needs. I wonder if any PoP readers know of anything that might fit the bill. Ideally, it would be a furnished one bedroom for under $1400, but everything is negotiable. We’d be willing to live anywhere in the PoP readership area that has decent transportation to downtown.”

Wow, what an insane situation. I’d like to think you could fight the eviction if you were willing to go through some headaches. I think if you plan on leaving in the Summer then it may certainly be easiest to fight this. I know DC has some pretty solid tenant laws. Can any readers provide some advice on this front? Do you think this person should try and fight the eviction or would it be least painful to just find a new apartment?

And now for the Friday Question of the Day – what is your craziest landlord story?

I had a landlord not believe me that there were rats in the apartment walls (near the zoo). Finally when I was moving out I was being charged for not cleaning up properly. So I showed the landlord the huge holes the rats had eaten in the wall and said I wasn’t paying a dime. The place was pretty trashed but I got out with my full deposit refunded.

Thanks to Matt for sending: “Cane’s under construction at Union Station!” Godspeed and give this man a raise. You can see Raising Cane’s menu here. Stay tuned for an opening…