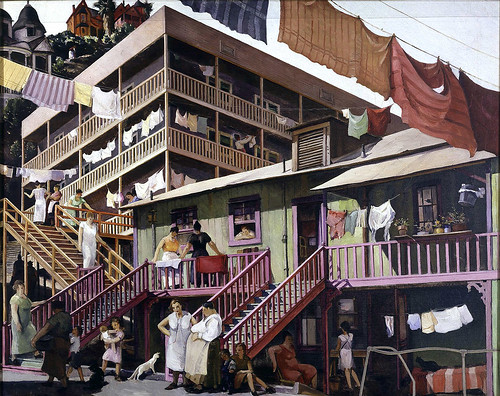 Of all of the amazing museums in DC, my undisputed favorite is the Smithsonian American Art Museum located at Gallery Place. Given that it is slightly north of the National Mall, I particularly like to show it off to out of town visitors who otherwise would have missed it. This past weekend, I had the pleasure of introducing the museum to an artist friend and we thoroughly enjoyed the current show titled, “1934: A New Deal for Artists”.

As the history of the Great Depression is being scrutinized for clues as to responses for our current economic turmoil, this exhibit is poignant. The show is comprised of fifty six paintings that resulted from the Public Works of Art Program, the first U.S. government support directly to individual artists. Recipients were tasked with expressing “The American Scene”. As such, the paintings present a variety of perspectives to a moment in time, ranging from urban and rural environments, to representations of leisure, labor, and industry. I was particularly intrigued that the program included minority artists who may have been denied other opportunities to present their work. Continues after the jump.

In addition to seeing a need to employ artists, it is profound to me that, in the midst of addressing serious financial and other practical needs, Franklin Roosevelt had the vision that Americans would benefit from cultural nourishment. The paintings were displayed in public venues such as libraries, schools, post offices, and government buildings, including the White House. At a time when arts funding is often disdainfully referred to as earmarks or pork spending, the success of this and subsequent programs, including the Works Progress Administration, speaks to the tremendous impact the fine arts have upon cultural identity.

As works of art, the paintings stand well on their own. This is one show, however, where the collateral information which tells the story of each artist and the artwork is especially interesting. I left the exhibit with a broader awareness of the experience of my father’s and grandparents’ generation.

The exhibit will be on view through January 3rd, 2010, after which it will tour as a traveling exhibition around the United States for three years. The Smithsonian American Art Museum is located at 8th and F Sts NW at the Gallery Place Metro. It is open daily from 11am to 7pm. More information can be found on their Web site.