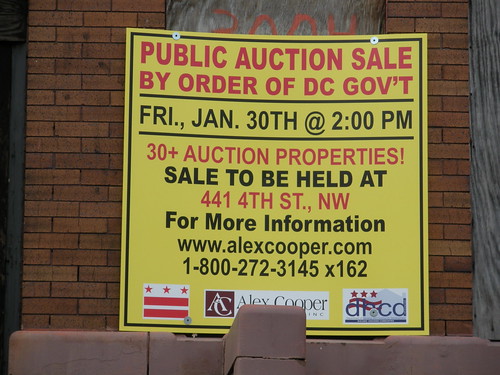 Here’s hipchickindc’s original post on DC’s liquidation of vacant properties. The Post did a small write up on it. But I got a few updates from some readers that I thought I’d share:

“Several weeks ago I came across a post about the D.C. Government auction. Several members posted comments pertaining to what they thought the “going prices” would be for several of the homes listed. Well I attended the auction and to my dismay the properties went for well over the $50,000 – $75,000 some of your members estimated. I thought they might be interested in learning the “hammer price” for several of the “hot” properties included in the auction. The prices listed below do not include the 5% buyer’s premium that will be included in the final purchase price.

If you recall most of these properties appeared to be little more than shells. Good Deal or Not? You tell me.

I would be interested in finding out what your readers think of these prices.”

Another great reader’s take after the jump.

As previously mentioned on this blog the DC gov had an auction of approximately 30 properties on January 30th. Overall the properties seemed to go for close to or above market value (I am not an agent). It appeared as if the primary buyers were developers as the same people were buying multiple properties. Keep in mind many of these properties will require complete gut jobs. The auction attendance was high enough that the fire Marshall showed up and allegedly many people were left standing outside unable to enter and bid on the properties. I did not see how many were outside, but I can confirm that there was a line of people who had not gone through security when the bidding started.

A couple of notable properties for POP readers were sold.

627 Keefer Place NW – Pulled from the auction – no explanation.

709 Kenyon St NW – Pulled from the auction – no explanation.”

More Stories
Back in the DayRandom Reader Rant and/or Revel