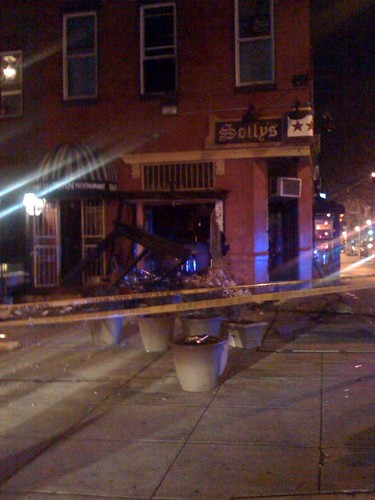 DCist is reporting some terrible news this morning:

At approximately 12:20 a.m. on Saturday morning, a taxi driver lost control of his vehicle and crashed into Solly’s Tavern at 11th and U Streets NW, injuring at least six people.

“The building shook,” said bar owner John “Solly” Solomon, who was upstairs when the cab collided with the east side of the building. “The tires were spinning because the driver’s foot was still on the pedal, and it kicked up smoke into the bar.”

This is terribly frightening. And I also feel super bad for Solly who is one of the nicest proprietors in town. This past summer I was sitting with friends on the porch when a car, that must’ve been going over 90 miles an hour, flew by us and eventually crashed into the Children’s hospital building further north on 11th. I wonder if 11th street is particularly susceptible to insane drivers?  Thank God no one was killed in either incident. I’ll try and find out when Solly’s will be able to reopen. Read the full scoop on DCist.