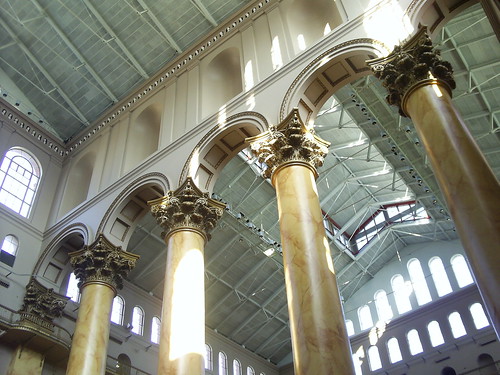 At PoP’s request, I went to the National Building Museum. In the afternoon. In jeans. No ballgowns or tuxes in sight. Weird.

I had never been there during the day before. Well, I had once, but that was to tour the space for a fundraiser I was throwing. (we did not ultimately use the venue) But other than that, the Building Museum has always been to me a place where obligatory, formal-wear-required parties and balls and benefits take place, where all that there is to look forward to is the open bar and the hope that there will be passed hors d’oeuvres more interesting than mini-crabcakes. So when PoP asked, I gave an enthusiastic “Sure!” – especially since the very next day, I was meeting a friend for lunch at Eat First.

After lunch on Friday, we wandered over there. My friend, an employee at the GAO, said that she’d been inside many times. After all, on cold nights, it was an excellent (and warm) shortcut from her office to the Judiciary Square metro. And of course, those cookies at Firehook are fantastic. I asked if she knew what sort of stuff was in there, and other than the fountain and the columns, with which I was already familiar, she didn’t have much more of a clue than I.

To be fair, a former colleague’s wife works there. I’ve never met her, but I asked him once, “So what kind of stuff is there,” and he said, “You know, architectural stuff. An exhibit on DC. A ton of empty office space that they’re looking to rent.” 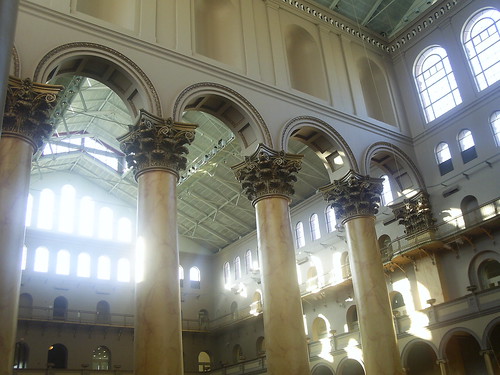 When we walked in, it was clear they were setting up for an event. Not the kind of black tie thing I was fairly used to, but something else, with a lot of booths. We later found out that it was for Discover Engineering Family Day, an event put on my the National Engineers Week Foundation and the Museum. Not ever having been especially prone to science, or math, or anything engineer-y, my response to learning this was, “Seriously?” In reality though, I wish I’d known about this in time to let all of you know beforehand (the event took place on Saturday the 21st) because it looked really cool. The woman I spoke to was from the National Science Foundation. They were in the process of constructing a tank where they would be simulating tsunamis! AND, where you could construct your own mini structures, to put in the line of the tsunami to be destroyed! When I excitedly explained how that was pretty much the coolest thing ever because tsunamis are my favorite natural disaster, the nice lady invited me back for the event. Unfortunately my extreme discomfort in the presence of one child, let alone hundreds, prevented that from happening – but damn, it seemed cool. Continues after the jump. 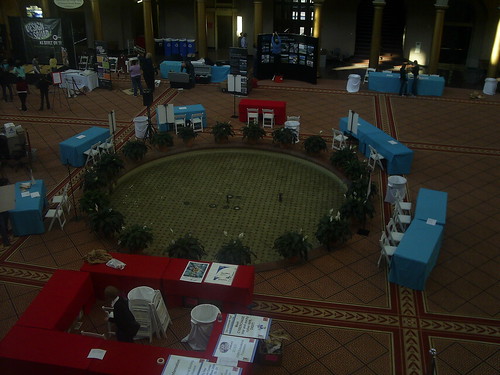 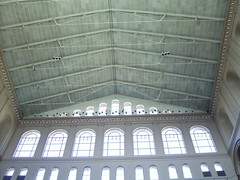 But, I digress. As far as stuff you can see on an ordinary day there, I’m going to be honest, not much. The DC exhibit is completely awesome, and you all should go check that out immediately, if you haven’t already. Lots of old pictures and models of the city, and some neat videos and things. (Although, my friend and I noticed that Mt. Pleasant was conspicuously absent from the video tour of DC neighborhoods.) I would have loved to have shown you, but photography is forbidden everywhere in the museum except for the atrium. 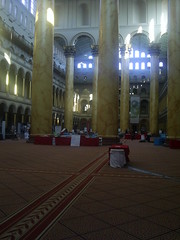 We also checked out the Green Community exhibition. It was interesting enough. My friend was a little overly enthusiastic about the Freeganism video, which makes me question whether to ever attend a party at her place, lest the guacamole be a find from the previous night’s dumpster diving excursion, but otherwise it did a good job at turning some intangible concepts of conservation and pollution into something visual and less amorphous. Again, I’d love to show you some photos, but I was warned sharply in the DC exhibit, and wasn’t going to push it.

The only other exhibit I saw (and we wandered around a lot and looked for stuff to see) was the Museum’s retrospective, Cityscapes Revealed, but by the time we got to it, I was annoyed with the no photography thing, and my friend had to catch a train so I didn’t check it out. Apparently there is also an exhibit on buildings along tourist routes in Norway, but we didn’t see it. Same with some interactive thing for kids, which we neither sought out, nor saw. I’m guessing that the set up for the event was in the way.

We did however stop into the Pension Commissioner’s Office, where we think maybe we weren’t supposed to be, but the door was open-ish, so we went in and snapped a few pics of the awesome fireplace. 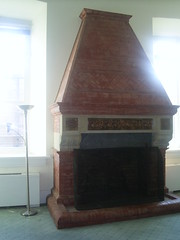 Our last stop was the gift shop, which has a lot of great stuff. I was especially impressed with this fancy-schmancy chopper. (Vince Offer and his Slap Chop don’t even compare.)

So I guess my point is that the National Building Museum is a gorgeous building. And the DC exhibit is a must-see for every resident, and I could have spent the whole time in there and been happy I’d finally went. But my overall impression of the place was “eh.” It seems like it could be a great resource, and maybe I was just there on an off day, but there just wasn’t that much to it. No doubt I’ll be back, but I suspect that the next time, I’ll again be sporting formal wear and thanking God for the open bar.

UPDATE: Just chatted with a friend about this and she said to be sure to tell you to take the free tour. She said it’s really informative and goes more into the history of the actual building (the best part of the place) and she really recommends it. I might go back during the day sometime to check it out on her word.