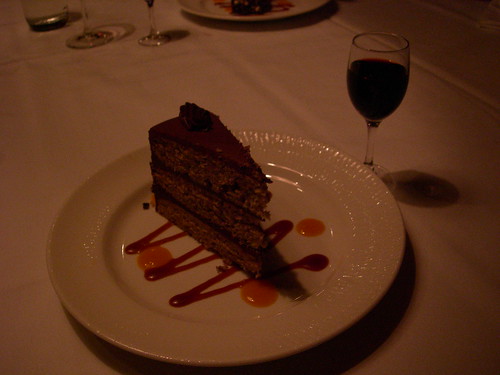 Emmm banana and chocolate cake, originally uploaded by pjaol.
Ed. Note: The following was written by Robyn. I’d also like to make this the FQoTD – Do you take advantage of restaurant week? If so, how are your experiences? Any restaurants you’d recommend that really do it right?

First course: Caramelized Gnocchi. Followed by Crab Cakes with house-made tartar sauce. And for desert: Dark Chocolate Soufflé. All enjoyed in a mod, architecturally-lit main room at a fine dining establishment frequented by DC political powerhouses and socialites alike. Sounds exquisite, right? Well not if the gnocchi came out cold, you have to eat around the shells in the crab cakes, and it’s all washed down with a glass of mediocre chardonnay – just one because your lethargic waiter never notices your empty glass to ask for a refill. Welcome to DC Restaurant Week, a week of lunch and dinner specials that lures you in with enticing bargains at fine dining establishments….then chews you up and spits you out feeling unsatisfied with a lighter wallet. For someone who’s admittedly gullible, Restaurant Week gets me every time. Lunch is just over 20 dollars, dinner just over 35 – a steal when most restaurants can charge double that 50 weeks out of the year. So twice annually, I pack my week with at least two Famous Chef restaurants, one Pretentious place, one C-List Celebrity Visited Here During Inauguration, and at least one who claims that Obama has visited or expressed interest in visiting (however mildly). A flurry of texts are exchanged (HAVE ONE SPOT OPEN CEIBA 8PM HEAR BRAISED PORK GOOD) and I look forward to a week of very good eats at places I couldn’t normally afford. Except for the most part, the service and the ambiance is…well, bad. And as a self-confessed Ruby Tuesday fan, I don’t expect much.

Because I’m younger, I don’t own Gucci heels (actually I don’t own a single pair of heels – I think 5 foot 9 is tall enough), and I tend to have a my wide-eyed why-are-there-so-many-forks nature, it’s obvious that I’m there for the specials. Due to this, I feel subject to what I call Restaurant Week Discrimination (RWD). It’s that rushed, indifferent demeanor of the wait staff, the unapologetic plate auctioning (Who got the scallops? Anyone? No one? Sigh…), and the general mechanical nature of the staff as they quite visibly just want to get over catering to us common folk. Sometimes I want to play the part, put on my best Southern twang and exclaim “Oh mah gawd Bernie! Sayz here they serve thar tuna rawr! It ain’t cooked!”

Except I don’t have a friend named Bernie. Any Bernie’s out there want to be my friend?

I get it. It’s a week that attracts us 5-figured salary types and I shouldn’t expect to be treated as royalty. But Restaurants, can you at least humor me? You don’t have to treat me as if I was the First Lady, but maybe like one of her aides? Now I won’t name names, except the most extreme exception to RWD (Rasika), but in general, I’m not a fan.

Now if you excuse me I have reservations at a place where apparently Obama will be taking Malia for her report card. Or so I’ve been told. I said I was gullible.

Any Restaurant Weekers feel my pain? Or want to add to it? Bernie, you out there?

Read more →
More Stories
Are You Sitting Down? I Hope You’re Sitting Down, Cause This is Some Seriously Sweet ScuttlebuttBook Report from the PoPville Book Club (By Christopher)