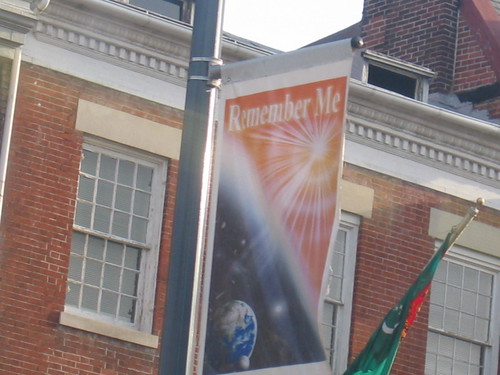 “This is a random question, but I was hoping you or someone out there would know the answer. I was on the 37 bus this morning going toward downtown on Massachusetts Avenue, between 23rd St and 22nd St NW. I saw these banners on the lamp posts that said “Remember Me” and they showed an image of the Earth and space, with some twinkly star design. It was really strange, and I didn’t know what the sign was supposed to mean. I wasn’t sure, but I thought that it maybe had something to do with Space Shuttle Challenger exploding? Does anyone know what those banners are supposed to be reminding us of?”

Hmm, this is a tough one. I think if it were related to the challenger there would be an image of the space shuttle. I wonder if there is any religious connection here. Could it be related to a Church? Could it be connected to the building with the flag that we see in the photo? I’m gonna go with some sort of church affiliation. What do you guys think?