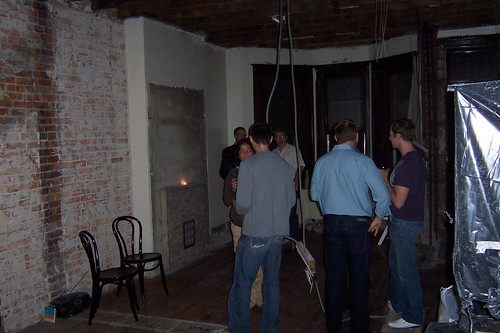 Shortly after closing, I wrote the first installment of the Adventures of Mark and Charles. Now I understand why reality shows film entire seasons before airing them. Poor PoP has been awaiting pictures and exciting renovation updates, and here it is, a couple months later, and the dynamic duo remain at the mercy of the DC gov permitting office. 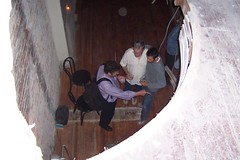 Although the house had been gutted to the walls by one of the previous owners, there remained many truck loads of dust saturated construction debris. Original woodwork that could be salvaged was carefully tucked into a generous neighbor’s basement. The rest was carted away after many back breaking, mask-wearing hours and a bit of help from friends. The stage was thus set for the long awaited “Champagne in the Shell” party. 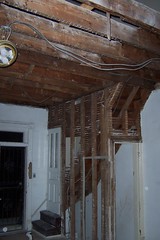 By candlelight and an electric lamp plugged into the one working electrical outlet, friends and neighbors gathered, eager to see the clean shell. With champagne-filled plastic cups in tow, tours were conducted by camping lantern. Stern warnings were issued as guests narrowly missed falling through a large opening in the floor where the staircase had once existed. Mark told the story of finding a letter from the 1940’s under the linoleum. We all oohed and ahhhed at the view of the pointy Victorian rooftops and the illuminated Capitol Dome and Washington Monument as seen from the third level rear window. Continues after the jump.

Now that the gargantuan pile of jagged pieces of wood no longer consumes the main floor, a solitary toilet sits in a prominent central position. The proposed walls have been carefully drawn in tape on the sumptuous heart of pine floors, exposed after many years concealed and protected by wall-to-wall carpet. A neat pile of building materials and a new old clawfoot tub awaits its usefulness once again. 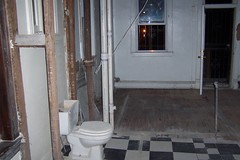 Despite their exhaustion, Mark and Charles appear to be holding up quite well. Many guests expressed wistfully how wonderful the house is and will be. Neighbors who have been suffering through years of living near an abandoned house openly exclaimed how pleased they are to see it rescued from the brink of destruction by evil developers.