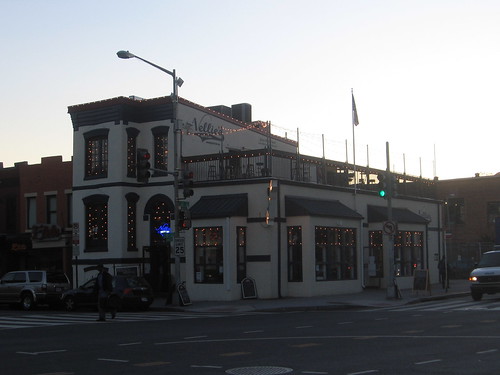 Most people who have heard of Nellie’s probably know it as the new-ish gay sports bar over on U Street. Or at least, that is how it had always been described to me. Being that I am not gay, and I hardly know the difference between a first down and a touchdown, I never really thought to go there. But, the other day while brainstorming for this week’s story, a friend suggested that I check it out. So, I did, and I loved it!

Nellie’s is a relatively new addition to the U Street scene, and sitting at the corner of 9th and U it’s just an eensy bit set off from the hustle and bustle of U Street, which is actually kind of nice. It’s still easy to get to though, only a block from the 10th Street exit of the U Street metro stop. And it’s hard to miss the regal looking white and blue building, with its great big roofdeck adorned with twinkling lights!

They have a pretty cute schtick on the inside too. The place is decorated with all kinds of sporting paraphernalia, pictures of professional and local, recreational athletes, and vintage stadium sinks in the bathroom. And, right in the middle of the ceiling, a big shiny disco ball!

I’m glad I decided to finally stop in for a visit the other night. I’m also glad that I arrived hungry! I think our eyes were a little bigger than our stomachs, but my friend Crystal and I decided to share an order of the mini hotdogs with sweet potato fries and some buffalo wings. Maybe not the most health conscious meal, but paired with a delicious Octoberfest, it was just what I needed after a long day at work. For those interested in lighter fare, Nellie’s offers some more “figure-friendly” options as well. Everything was great, and I thought the prices were pretty reasonable…although, I thought the beer was kind of expensive. That’s the only complaint I have really heard consistently about Nellie’s – that drink prices are a little high.  More after the jump. 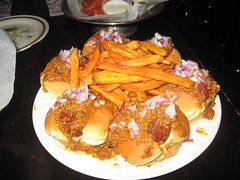 I’ve only been once, on a weeknight, and it was pretty empty when I was there, so I guess I can’t attest to what a regular night on the town at Nellie’s is like. But from what I have heard and read, it’s a lot of fun, always jam packed and not exclusive at all. I know that some people feel apprehensive about going to a “gay bar”, but I don’t get the impression that anyone would be made to feel uncomfortable at Nellie’s. I also don’t get the impression that Nellie’s would be hurting for business if a few people choose to go elsewhere. Since they opened in July of 07, they have been doing great and it seems that regardless of sexual orientation, plenty of people love Nellie’s. It’s become a popular neighborhood bar, and a great spot for Happy Hours, trivia nights, watching a game, or just hanging out and stuffing your face, like me! 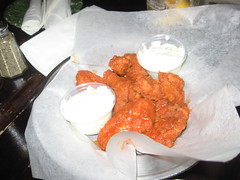