For me, it was a golden age at the restaurant. I had become an integral part of the staff. Performance review was coming up, and the only thing I was really worried about was my tendency to stray from the protocol we were taught to use on every table. I had my own system, and thought that it suited my tables and I very well.

One evening, the main owner, “Damien,” came into the restaurant to dine with a few friends. Damien was feared at the chain of restaurants he owned, mostly because he was curt and had the intimidating presence of an unfed hyena. However, Damien had always been nothing but nice to me, and often gave me the impression that he may have even been interested. Once, when food was on the line for one of my tables, he proceeded to gently jab me in the side and whisper, “Julian, your food is up.” 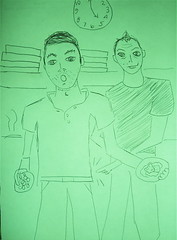 This particular evening, his party sat outside, and they drank a bottle of wine and some cocktails, chatting about the things that gay men on patios drinking wine talk about. None of the owners at the restaurant ever get checks at the end of the night, and only really need to tip. The owners all usually leave a twenty-dollar bill. Damien left me two, and something rather interesting – a discount card for a gym membership.

It would have been offensive if it had not been amusing. Yeah, I put on some weight since starting at the restaurant, where the prerequisite for anything on the menu was to bread it and fry it at least once, but come on – an extra juicy tip and monetary help getting me onto a treadmill? Of course, it could have been entirely coincidental, but I was not convinced.

“Christina,” the general manager, did my performance review the next day, and gave me two pieces of advice, via Damien, about how I could improve my service. Of course, like an expert critic, she gave me the good news first – I was well-liked, I was funny, and I had quickly become one of the strongest servers at the restaurant. Damien, however, felt that I needed to clean up my appearance, and that I could stand to up-sell the menu a bit more. Actually, his exact words were “You sometimes look a little sloppy.”  Story continues after the jump. 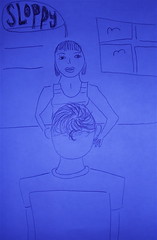 It was funny to me how my appearance had suddenly become an issue at the restaurant thanks to Damien’s special (or unintended) interest in me. Putting all the pieces together with Michael, it suddenly dawned on me that I was somewhat of a “sloppier,” less-fit version of Damien’s boyfriend. It made sense, in a way, but it was also somewhat of a discomfort to know that I had been criticized based on that rather than my skill as a server.

A few weeks went by, and it was a slow night at the restaurant. We were down to five servers, and all of us were killing time by covertly checking our phones through our aprons or chatting carelessly behind the server station. Cell phones were a major no-no while on the floor, but we all carried them in our aprons, anyway. Mine had been ringing incessantly for five minutes and when I checked to see who kept calling, I saw that it was my mother.

Jane, the manager on duty, was up front talking to the hostess, “Genine,” so I went to the back where the office was and dialed my mother quickly in the stairwell. As soon as I got a hold of her, she began asking me questions on how to use her remote control. I quickly gave her instructions and tried to get off the phone, but who should walk by at that moment but Damien, in for a quick pit stop to pick up some papers.

“Julian,” he said as he walked by. “Are you on the phone on my time right now?”

“No,” I said quickly, hanging up and flashing a smile in hopes of manipulating him into forgiving me.

But I did not say it quickly enough or loudly enough because at that moment he turned into the hyena that everyone claims to have seen but has been a phantom to me and snarled his twisted yellow canines at me and yelled, “ARE YOU ON THE PHONE ON MY TIME RIGHT NOW?!” 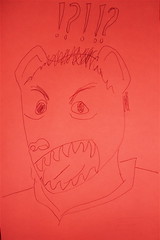 Now sensing that no answer would please him, I turned around and darted back onto the floor, my heart racing wildly. Later, Jane let me know that there was a note on the manager’s wall upstairs that said, “If any server is caught on his cell phone, FIRE HIM.”

I had not expected such drama over such a little thing, but I definitely felt like the honeymoon was over. The following week, it came up at every staff meeting that any server who was caught on their cell phone while on a shift would either be pardoned for the day or pardoned forever. Everyone would smile at me coyly, but even days after my encounter with Damien I could still see him, his eyes bulging out of that pale face, the veins screaming from underneath his forehead.

While working to combine the malt vinegars, As I turned my head towards the door to watch a family walk in, a few ounces of the liquid splashed onto the counter. As if directed by the gods, it made its way towards the edge of the counter, down the side, and like a poisonous venom, into the top opening of the fourteen hundred dollar amplifier. 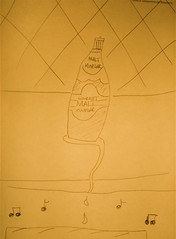 The machine sparked, popped, and the music throughout the entire restaurant stopped. As if in a horror movie, I turned my head slowly to look at what had happened, and despite the distinct clarity of the situation, as you could literally see the trail from A to B, in my mind all I could see was Damien’s predatory hyena eyes.

END_OF_DOCUMENT_TOKEN_TO_BE_REPLACED

More Stories
(Was it a) Good Deal or Not?Church Parking in the Middle of New Hampshire Ave. To Be Revisited Wed. September 17th