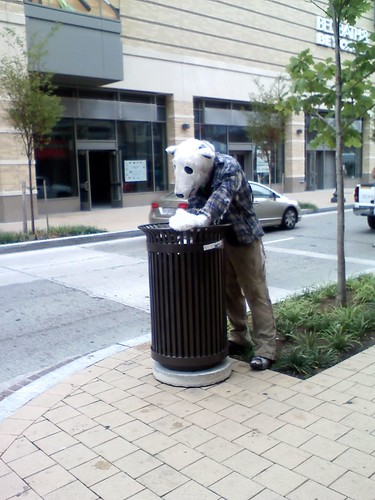 By now most people have heard of the Columbia Heights Metro closing on Tuesday due to a “suspicious package”. And of course the suspicious package was a stuffed “homeless” polar bear. And we learned that it was actually a Greenpeace/Mark Jenkins Collaborative art project. You can see a quote from Jenkins here.

The quote by Jenkins from Fox 5 says:

“My intention with this project was to leverage my street installations to promote awareness about the issue of global warming and the plight of the polar bear,” said Jenkins. “It was our shared goal that the public would develop empathy for the polar bear as they have for the homeless which we see as two connected issues.”

So the FQOD is: do artists/organizations involved with public art displays have a responsibility to alert the authorities of such displays? Or did the authorities irrationally overreact? Obviously there is hindsight now, but who knows what threats they may receive on a daily basis. Also, do you think this particular display is an effective one?