Warning: Some of the images contained herein might be upsetting, particularly to any vegans/vegetarians. I don’t know. Just felt like I should disclaim it.

There’s more than one Market in the East. On a recent Saturday afternoon, I ventured over to Florida Avenue to check out the Capital City Market. Roughly bounded by Florida Ave. NE on the South, 6th St. NE on the east, Penn St. NE on the north and the FL Ave. Metro on the west, the Market was originally located on the National Mall (somewhere near around Federal Triangle) and was relocated after World War I to make way for the Mall we’re all familiar with today.

I started my journey at Obeng International Wholesale, one of the few places still open so late in the day. (Things get rolling over there before dawn. If you’ve eaten in a restaurant in DC or grabbed something at a corner bodega in town, you’ve likely eaten something with a Cap City Market pedigree.) I was greeted with long lines of folks purchasing sacks of rice, dried fish, smoked goat meat and other West African specialties.

They also have hard chicken, which I swear I’m going to make my best efforts to stew this fall, but my ambitions this time of year don’t run quite as rampant as they’d need to for me to take on West African cooking for the first time. That said, I wonder if I could use a hard chicken in my paprikás, particularly if I slow cooked it for a day or two (obviously before adding the requisite sour cream)? I digress of course, but this is what I love about the Market – it always gets me to thinking about things, whether I like it or not. And it always makes me nostalgic for the markets of my past: the Strip District back home in Pittsburgh, the Nagycsarnok next to my apartment in Budapest, Lexington Market up the street from my office in Baltimore and the docks across the street from my place in Half Moon Bay, CA (which, when the boats came in, was the best fish market you’ve ever seen). I seem to gravitate to these places without ever really meaning to. Some people get excited about a new Harris Teeter; I get excited about someplace where I can get rabbits for 4.99/lb.  Story continues after the jump with tons more photos.

Moving on from Obeng’s, the next stop was DC Farmer’s Market, which is a cornucopia of, well, meat and other stuff (more on this in a moment). All makes and models. The vendors are eager to help (and sell you a sack of ribs, chicken feet, or pig ears) and answer any questions you might have. 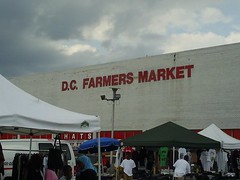 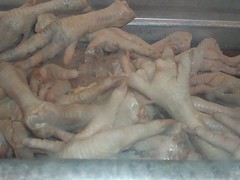 (“Sir? Yes. Can you tell me what one does with turkey tails?” “Yes, ma’am. Usually you bake ’em.” “Thank you sir.” “Want to buy some to take home and try out?” “Maybe another time, there are some Rocky Mountain Oysters over yonder calling my name. Thanks for the info though!”) 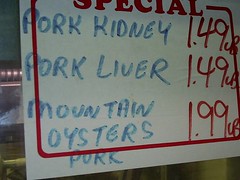 In addition to the meat emporium, you can also buy fake Coach purses, fake Crocs, ladies’ underwear, and pickled everything. 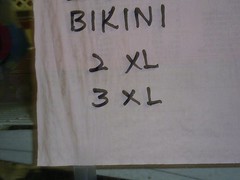 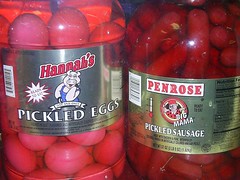 The DC Farmers Market is a bit like a microcosm of the whole market – you want it in bulk for cheap? You got it.

Leaving the Market, I wandered through the flea market outside, but it was shutting down. My last stop was to be A. Litteri’s for an Italian sub, but I arrived to see that it was closed. This made me sad, until I remembered that my schedule this week would allow me to return when it reopened on Tuesday. I figured this would also give me a chance to hit some of the other places that had closed while I was still enjoying Saturday brunch at the Derby.

Returning Tuesday morning was a different experience. The Market was busy with folks packing and unpacking crates and generally walking about with a purpose. I’m not sure if it’s because people are super friendly, or if I looked out of place in my suit and heels (I was en route to the office), but everyone was interested in helping me find what I was looking for. First stop was Best Equipment.

I’d heard a lot about Best Equipment in the past, but on my many trips to the Market, had never quite made it in. This time it was open, and I was in heaven. Now, I can’t think of a reason that I need a wok bigger than I could possibly hold in my arms, or a measuring cup of roughly the same size, but seeing it all there, laid out in front of me for purchase was almost enough to convince me that my kitchen was sadly incomplete without these items. 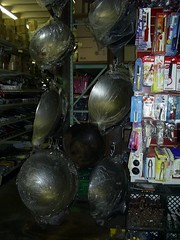 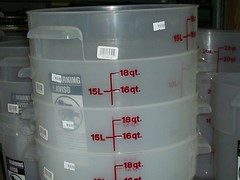 Instead, I refocused. What is the one thing my glassware has been missing for years? The thing I’ve been looking for around town at bars and restaurants alike for as long as I could remember (and where I’ve thus far only found at the Raven)? That’s right – old man beer glasses. You know, tiny pony glasses. They’re quite popular in corner bars in blue collar cities like Baltimore and Pittsburgh – but DC just isn’t “corner bar” like that and asking for a “small beer” is confusing to even the most knowledgeable and congenial barkeeps. So I made my way to the back of Best Equipment and it was like God’s own light shone down from Heaven illuminating what was to me at that moment the most beautiful selection – yes, selection – of old man beer glasses! 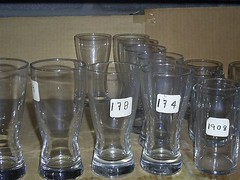 I gathered myself 4 “174s” and contemplated just making it a dozen, but now that I know where to get them – and get them in bulk if I so choose, at that – I figured I’d start reasonable. Moderation and whatnot. I continued to wander around past the basket o’ whisks, (for reference, because the picture doesn’t do it justice, the tallest came up to my shoulders; I’m short (5’3″) but that’s one hell of a whisk) 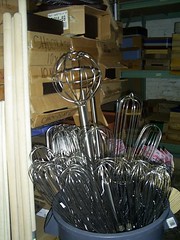 the aisle of knives, the wide and varied apron assortment, pitchers as far as the eye could see, and colanders that wouldn’t fit in my grandma’s stationary tub, let alone my tiny little kitchen sink. As I was checking out, I was chatting with one of the owners about heading to lunch. I was Litteri’s bound; but she almost persuaded me to trade my Italian sub craving for Korean (which in truth, I’ve also been dreaming of lately) over at Young’s. Since I know a couple of people who would be super angry if I ate Korean food without them (and a couple others who were going to be sad if I didn’t pick them up the subs I’d promised them) I stuck with my plan. Before moving on though, I asked what she thought of the New Town plan which is the public/private development plan being pushed by the city for the market. (Click the link, and some of the links contained therein for details. The long and short of it though is basically Mixed Use in, historic market/small business out, or at least confined to one corner of the new development. I’m going to do my best to keep my opinions on the plan to myself, but I love the Cap City Market more than little tiny beer glasses (that’s a lot of love, friends) so you might be able to guess where I stand on the issue.) The folks at Best Equipment don’t seem to be concerned about the plan moving forward with any haste (it has, after all, been in the works for a few years now) and told me that they’d see me again soon – when I came back for lunch at Young’s.

Making my way back down to Litteri’s, I ran across Layla Lounge, which is a place I will surely never go unless dragged by a roving band of club-going (and club-wielding, if they expect to get me inside), table-service types. I note its presence, because it struck me as a little odd to have what appears from its website a pretty swanky club next to a joint that sells whole lambs and goats – even if this was a common occurrence back home. I thought it was weird then, but there are plenty of other bars in the Strip District – not so much in Cap City Market. Curious as I was, I was a woman on a mission – there were subs to be procured.

Entering Litteri’s is a little like entering Heaven. Sure the availability of every conceivable variety of pasta. 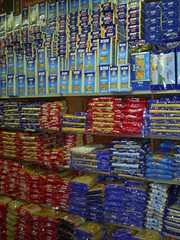 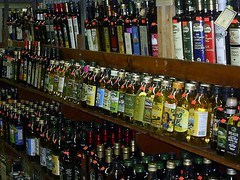 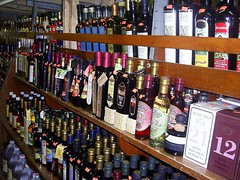 is drool-worthy, but it’s the Italian Subs and assorted meats, cheeses and sausages that bring a tear to the eye. I knew I was already a little late to have entirely avoided the lunch rush, when I turned the corner to see the deli counter was already 2 deep with locals, MPD and DCFD.

I placed my order and got to snapping pictures and chatting up the regulars. The idea that Litteri’s would ever be victim to a city redevelopment plan was inconceivable to everyone there, none of whom wanted to bitch about it but rather chose to look at the bright side – we were all in line for the greatest sandwich in DC. And if we so chose, we could also pick up 5 pounds of the best Italian sausage (made fresh that morning) or a ½ pound of mortadella (or sopresatta or capicola). When I got my sandwiches (two 12″ Italian subs on soft rolls) I set to stocking up on my pasta supply, but then remembered that I had a job to get to, so I left and was on my way.

I don’t want to get into all the implications of the Market being redeveloped. I know that any thoughts I have on the matter stem from my heart and stomach and not from my head (the livestock equivalents of all of the above are of course on offer at the Market). In the meantime, I’m going to encourage everyone who hasn’t to check it out in case it’s not there much longer.

(I never even got to mention any of the number of places to get fresh produce of every conceivable variety, not to mention Central and South American sausages and cheeses, any sort of noodle or rice you can think of, and pretty much all things delicious. Including it all in one post is a near impossible task. More reason for you to go check it for yourselves.)