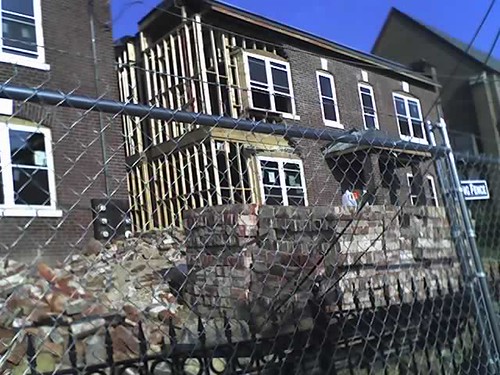 It’s not clear that a wall actually fell down.  It almost seems like they removed the bricks.  But I did see a stop work sticker on the door.  A reader mentioned this collapse in a comment yesterday and sure enough it looks terrible. It’s too bad because the site looked promising and those buildings had been boarded up for quite a while.

Previously a reader had written me:

“FYI – there are two condo buildings being developed on 7th street between Shepherd and Randolph. I think you profiled these two boarded up buildings in a previous post. In any event, I bumped into the developer on my walk to the metro. He was a nice gentlemen and said that he grew up in the neighborhood. According to him the condos should be finished in about 8-10 months. He said each unit will have two bedrooms. Looking at the building, I would guess no more than 4 condos for each building, but I’m no expert. Swing by the buildings…they got contractors swarming all over them most days.”

I hope they get their permits in order soon so that they continue the progress that was being made. So what makes a wall like this collapse? Is it poor workmanship or related to the crazy weather that we’ve been having?  Or is it possible that this was planned?