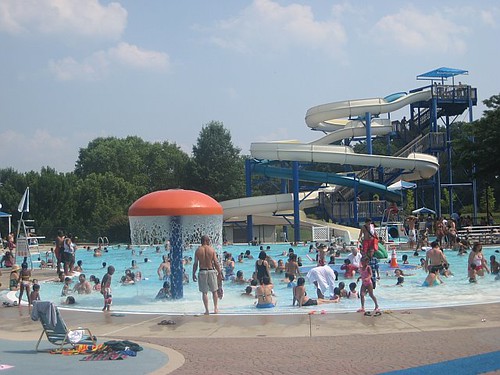 A couple of weeks ago there was some discussion about where to go for some fun in the sun. Unfortunately for us DC residents, the closest beaches are still a couple hours drive away, making anything less than a full-day trip kind of not worthwhile. What DC does offer in terms of aquatic R&R is a great number of public pools. I can’t speak for them all, since I’ve only been to the one in Georgetown (3400 Volta Pl) but it wasn’t half bad and I’ve heard great things about Dupont (2500 N St).

What DC is lacking, however, is a water park. Now, some people think they are nasty (and I don’t know that I would disagree) but when I heard about one nearby in Gaithersburg, MD my brain immediately reverted to 10 years old and all I could think about were childhood days spent running wild at Splish-Splash (any Long Islanders out there will know what I’m talking about). So last weekend, Boyfriend, my friend Vicky, and I took the 30 minute drive out to Bohrer Park to see what we could find.

It turns out that the Water Park at Bohrer Park is actually just a pool with two big water slides, but let me tell you, it was a good time! I haven’t been on a waterslide in years, and once I got over the initial public-pool-bacteria-ick factor I was having a blast. We must have gone down the blue slide about 10 times each (the white one wasn’t as much fun). It literally shoots you through a 250 foot tube in about 5 seconds! Story continues after the jump.
After a little while we needed a break, and Vicky and I were having a photo-shoot under the ‘raindrop water umbrella’ when all of the sudden, over the loudspeaker came an announcement: “Attention all visitors, the pool will be closed for the next 30 minutes, please exit the water.” We figured they were doing some routine maintenance so we headed back over to the water slide where we were greeted with the same request. I asked the lifeguard what happened and all she said was “the pool is closed for 30 minutes.” I inquired further, “uh oh, did something gross happen?” She only nodded, and that was when we knew it was time to go. But not before stopping to snap a picture of the “excavation!” What we didn’t capture on film, however, was a grown man jumping into the pool fully clothed, shortly followed by the pool manager (also fully clothed) all in the midst of the waste removal process. I have no idea what was going on, but there was an awful lot of excitement and yelling!

Our day at the pool may have ended on a not-so-nice note, but all in all it was great fun. I guess the initial ick-factor I felt was there for a reason! So, maybe this account doesn’t have you champing at the bit to check out the pool at Bohrer Park, but they do have mini-golf, which is where we headed next and Boyfriend promptly kicked my butt…


Next on the agenda is a visit to the legit water park in Manassas, VA. That’s even more of a stretch for PoP blog coverage than Gaithersburg, but depending on how it goes, I may provide an update! Until then, stay cool kids. 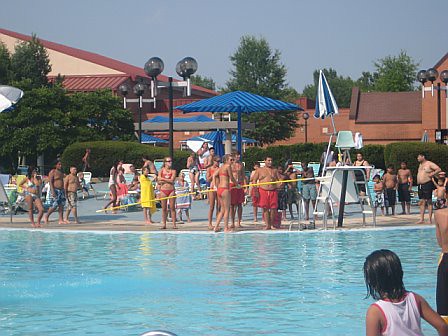