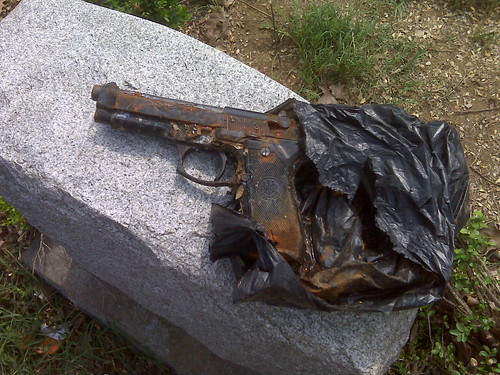 I’m half-Latvian and was raised bi-lingually and sort of multi-culturally. Well, it turns out that there is a sizable portion of Rock Creek Cemetery that is “the Latvian section.” It’s where a lot of the WWII-era Latvians who settled in the DC area are buried. From time to time a group of us Latvians get together and do a little maintenance of the graves in the Latvian section.

Anyway, so we’re out there working on Saturday and one of the men working with us feels something heavy under some leaves that are under a bush. It’s in a black bag and would have never been seen if it wasn’t for us cutting down the bush. He picks the bag up and finds a black Berretta handgun loaded with a full clip and the hammer cocked back ready to go.

The gun had a bit of fresh rust, due to the fact that the bag was broken and all of the rain we’ve had lately. Considering those factors, we deduced that the gun couldn’t have been hidden there for more than a few months. Likely someone either hid it there and lost it, or intended for it to never be found. The guy who found the gun, using the plastic bag and not touching the actual gun, placed it on top of a gravestone.

So, being a good citizen, I call 911 to report what we had found. And then, not surprisingly, things went downhill. Continues after the jump.

The 911 operator, though friendly, was having some issues. Apparently “Rock Creek Cemetary” was not a very helpful description of where we were. She repeatedly asked me if I knew the address and I repeatedly told her “No, it’s the big cemetary between N. Capitol and New Hampshire”. She told me that she was fully aware of where it was located but had to fill out the “address” part on her computer. I then heard her going back and forth with another operator or her supervisor about what to put in the address section of the form. This took a few minutes until they overrode that issue one way or another. Stating the obvious here, but what if the call was a real emergency, and not just a found gun?

Anyway, so the cops finally show. The officer’s first words to me — “Sir, the address of this place is 210 Allison St.” Gee thanks, I’ll remember that in case I ever have to call 911 from here again. Beyond that the cops were very friendly and helpful. As the bulk of us packed our stuff up to go, we were told that the two officers were waiting for crime scene people to come by and process the scene (CSI stuff we are thinking).

Tonight I found out from the guy who found the gun (who stayed on the scene after we left) that after an hour of waiting for something to happen, the cops announced that he had disturbed the scene by moving the gun (even though he never touched it, only the bag) and that nobody would be coming by to work the scene. They bagged the gun up and took off.

So other than the cool picture of the gun, the lessons I’m taking from my Saturday morning are that DC’s 911 service is predictably still working out kinks and that paperwork truly is a police officer’s biggest enemy. Even without forensic work, just having to bring that gun in was probably an hour of forms for those officers. Who knows how long someone would be at the desk if they worked the scene?