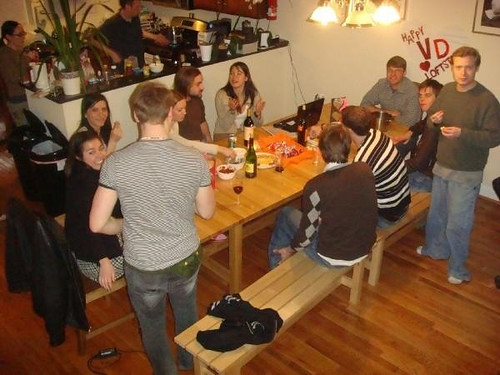 Many may recall that I was super intrigued when the Lofstel opened up last January at 4115 8th Street. So I was super excited to hear about Karen’s adventures spending a night there. I have to say, it really does sound super cool.

I knew I was in for an interesting night the moment I stepped into the seemingly unremarkable rowhouse on a sleepy, non-descript street in Petworth. From the outside, the house looked welcoming, yet quiet, like any other rowhouse. White Christmas lights decorated the front porch, and a warm light peeped through behind patterned curtains that obscured the windows. Yet after ringing the doorbell and being ushered inside by a scruffy yet genial 20-something guy, I saw immediately that the rowhouse’s exterior was deceptive, providing little hint of the life within.

About twenty-five-some people milled about inside–all of them appearing to be in their early- to mid-twenties-all of them perfectly at home. In the large open ground floor was a kitchen, dining area, and living area, and the youth milled about, some cooking, some sitting and chatting at the long dining table with picnic-style benches, some vegging out on a deep L-shaped couch in the living area, watching “So You Think You Can Dance,” or simply tooling about on their laptops.

I was in D.C.’s Loftstel (http://www.loftstel.com/dc/index.html)–one of the quirkiest hostels you can find in D.C. and probably the entire U.S.-designed for students or interns who need a cheap place to live during a summer or temporary stint, and want a place that’s laid-back, communal, and friendly. The Lofstel fits that bill nicely-it’s a place where people come to stay from a day up to months at a time, and during their time there meet people from all over the United States and indeed the world, usually becoming fast friends. Story continues after the jump.

The D.C. Lofstel is rated the number one hostel in the area. New York and Philadelphia also have their own Lofstels, where they rate number one as well. Los Angeles in addition has one coming soon. The Lofstels are “designed to encourage interaction among our guests as much as possible. [The] rooms (separated by gender) are shared, as are the bathroom facilities, kitchens, and living rooms.” The Lofstels are advertised as an affordable housing option for international students and interns (although during my stay the distribution was about 1/3 international and 2/3 from the States) to find comfortable short-term and long-term dormitory accommodations.

I checked in with the resident advisor, a friendly Turkish fellow who was very apologetic when he couldn’t find my reservation right away in the computer, which sat inconspicuously in the dining area (not your normal check-in accommodation).The Lofstel was nearly booked solid, he explained to me, and so it was important to figure out the exact bed reserved for me. A fellow Lofstel-dweller joking and good-naturedly inquired if he’d have to sleep on the floor again to make room for a newbie.

After my reservation was found, I was ushered to the second floor, which belonged to the girls–two rooms of bunk beds, one sleeping eight and another sleeping six, and a single room for the RAs. My bedroom had a bath and shower, and another was located in the hall. I was told the third floor was an identical layout, but reserved for boys. The basement housed another group of beds as well; the house could accommodate, from my best guess, about 45 people.

And despite what I expected, I didn’t feel crowded in the slightest. It’s not that I wasn’t nearly elbow to elbow when sitting down to watch the Daily Show with my temporary roommates–I totally was. It’s that everyone was so respectful and friendly it just didn’t matter that personal bubbles were practically non-existent. Also the Lofstel was so wonderfully inviting and clean (in fact, cleaner than my own group house generally is) that I felt as comfortable in the Loftstel living room as in my own.

Throughout the night people milled in and out of the house, going out for a night on the town, just coming home from work, or going for a quick beer run. In the house, activities were scattered but laid-back. Occasionally people would gather round someone’s laptop to watch a video of interest on YouTube, other times there would be conversation about people’s internships or studies, and other eccentric conversations that were reminiscent of my own dormitory days were plentiful. I myself had a shortish conversation with a fellow who was interested in the book I had in my hands (a Neil Gaiman) and he told me about his own love of all books dealing with theory (he proclaimed Judith Butler as his favorite, which delighted me to no end as her theories on gender, sexuality, and language are some of the most fascinating I’ve ever come across). On several occasions I heard conversations side-track to professions of love for the Lofstel, or colored with comments such as “only in the Lofstel.”

Overall, it was a very bohemian, intellectual atmosphere that struck me as similar to what I imagine a commune’s might feel like. Amnesty International posters donned the wall, old copies of the Nation and the Journal of International Peace Operations were in a magazine rack, and a biking map of D.C. was posted by the front door. My favorite wall art was a sheet of index paper tacked to a cork board on which the words “No Racism, No Sexism, Pls” were scrawled in pen.

I got the chance to talk with a few of the roomies about their experiences, and they were overwhelmingly positive. Everyone was very friendly and respectful, I was told, and people often hung out and became fast friends. A kickball team had been organized–a sign up sheet was tacked to the front door–and there was talk about going to a baseball game over the weekend. Everyone was good about cleanliness and there was a strict crack-down on kitchen etiquette (I was told when I first checked in that the one rule to be careful of above all others was to wash my dishes immediately). Cleanliness was also facilitated by a shoe rack by the front door–roommates for the most part padded around barefoot. Hardly anyone ever had problems with other roommates (which was amazing to me given that even though I have some of the best roommates in the world and we still have squabbles from time to time–and there are five of us, not forty). If people had problems in general it was usually being wary of the neighborhood than having anything to do with the Lofstel itself.

Most people ended up staying for about five weeks, though I was told there was one boy who had been there going on three months, and of course I was only there for a single night. One of the girls I talked to said she wished she could stay at the Lofstel for the duration of the summer, but she wasn’t able to renew her reservation because they were booked solid. She wasn’t looking forward to having to stay in the George Washington dorms in a few weeks, where the rent is substantially heftier and the communal atmosphere not as strong.

One of the perks about the Lofstel, besides the atmosphere, is its price–or rather it was. My single night cost approximately $25, but currently a month’s stay costs $950. That’s not exactly cheap–my room in a Columbia Heights rowhouse is a couple hundred less–especially for an intern or student. But many of the people I talked to said the rates were much lower when they reserved their bed. My guess is that summer rates are in effect and the owners are adjusting their prices to meet a higher demand. But $950 a month is still a difficult swing for an intern who could just as easily find a single room to sublet closer to downtown for less.

My night there was fairly restful, given the fact that I was in the novel situation of sharing a room with seven other girls and I haven’t slept in a bunk bed since my freshman year of college. But I was comfortable–the comforter was fluffy and warm and the mattress was adequate. In fact, I was startled to wake up in the morning and see that a good portion of my roommates had already woken and departed–I hadn’t stirred at all as they were getting ready. I did have to wait a few minutes to use the bathroom, but because there were two bathrooms to choose from I didn’t wait long.

I felt momentarily sad to leave in the morning and go back to my regular life, yet it was good to get back to my own house and enjoy the quiet and solitude of my room for a while before starting my day. Though I enjoyed having so many people around for the night, and probably would have really liked to stay through the week, I don’t know if I could do it for a month. The website warns that “privacy is limited, so if you’re relatively shy, you may want to consider other options,” and I feel the Lofstel really is for people with a very specific frame of mind and way of being. But never-the-less, the Lofstel is truly an amazing housing option in D.C. and provides for a unique, gratifying experience. Even if it’s not a place I would want to live long term, it makes me happy to know that it’s there.