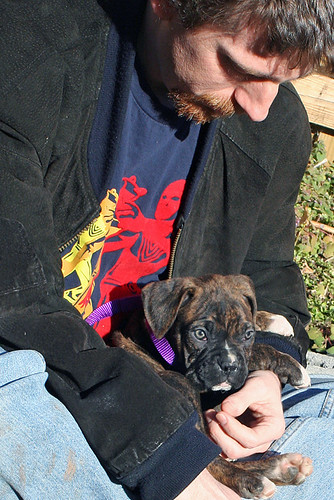 DC is dogtown, make no mistake. Or at least, the neighborhoods I frequent have a thriving dog population, from Logan Circle (work) to Columbia Heights/Park View (home): there’s always someone strolling with a dog. Or being dragged by one.

And to me, it makes a neighborhood more inviting. Dogs are beasts who thrive on pure joy. Once a neighborhood gains a healthy population of well cared-for canines, the vibe extends far beyond the owners: It strengthens the community in meaningful ways.

I lived in Columbia Heights years ago, during a time that many remember with shudders and the sound of frequent gunfire in the streets at night. I was renting a share of a rowhouse basement and couldn’t afford a meal more exotic than ramen noodles and coffee, so a dog was out of the question.

Eventually, I got an offer to move in with a friend in upstate New York and possibly break into publishing, and took it. But I missed my spot on Monroe Street, by the rotten shell of the Tivoli Theater. I figured, I’ll go to NY, find a career, and come back to BUY one of those victorian rowhouses, get my dog, and be a freakin’ hero. That was 1990.   (Story  continues after the jump.)

And it basically worked: I got the career AND a charming wife in the process, dragging her back to DC 16 years later. But during my time away, the housing market had gone absolutely insane. Career or no career, there was NO BLOODY WAY I was going to afford that rowhouse anymore. We ended up with a smaller one which needed work, on the other side of Georgia Ave. And we love it. 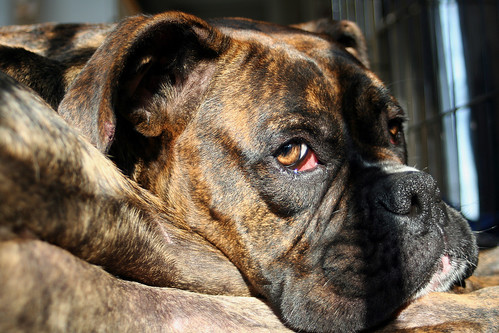 Then, after months of obsessive research, we got our puppy: a boxer we named Gomez (after my childhood hero, the patriarch of the Addams Family. It fit the boxer’s energy). I had owned a boxer long ago, and I was convinced that it’s the best breed in the world. Or the funniest. It seemed like a nice dog for the city; friendly and lovable, but “strong” in all the right places. Some folks mistook him for a pitbull–maybe that’s a bonus? To me, there’s no resemblance at all between a boxer and a pit, but what the hell?

One thing I noticed was how, as an urban dog-owner, your senses become focused differently. I began to see the old neighborhood from a new perspective.

It starts with having a reason to appreciate the odd patches of grass in the area, such as the hill of turf on the north side of the McMillan Reservoir; places I’d normally pass without a thought. The loop around Washington Hospital Center and the reservoir became a great place to walk the dog and meditate on the neighborhood. Being out there at sunrise in the winter, with the early light against the architecture of Howard U and the water…it really is a good-looking slice of DC. These are moments I may have otherwise slept through, sights I would seldom see.

Walking Gomez also caused us to focus our attention closer to the ground. Would I have noticed the huge number of liquor bottles on the sidewalk otherwise? The potentially dangerous trash and random sharp objects? Almost overnight, getting this animal had transformed me into someone that actively gives a damn about his corner of the city: I can’t say I’d be the guy picking up broken vodka bottles from the sidewalk on Warder Street if it wasn’t for the dog.

And having a happy dog on the end of a leash breaks down so many barriers with neighbors. Folks stopped at traffic-lights would roll down their windows and ask what breed he was, what’s his name, or even: man, you want to make some bucks breeding him for the fights?

Once, there was an older lady who rushed down off her porch like a king-hell dynamo of rage and fury: She was sure we were letting our animal squeeze mountains of shit all over town without cleaning it up, etc… But once my wife showed we had bags and knew what we were doing, the woman calmed down and a pleasant conversation ensued. She may have been completely insane, or just concerned, but as long as everyone is civil, who cares? 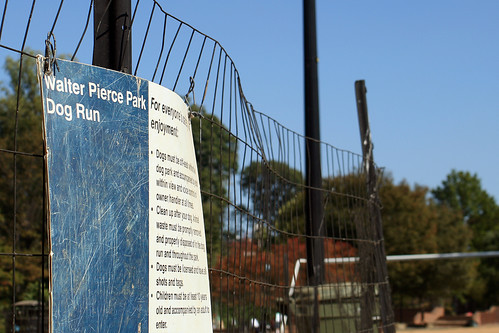 Of course there’s a whole micro-culture at the local dog park. At the moment, the best we have in DC is the Walter Pierce dog run in Adams Morgan. It’s the only true outdoor leash-free facility in the district unless you count Congressional Cemetery, which has restrictions and fees and is at the far end of the city (although it is a beautiful place). Certainly, there are other places in the suburbs, but why not stay local and meet some folks from the extended neighborhood? If you go during the same time each week, you’ll find yourself forming bonds with others, and your pup will have made fast friends with a few choice dogs as well. But stay alert: aggressive dogs and/or inattentive owners can bring the dog-park party to a screeching halt in an instant.

Recently, there’s been some local press concerning the easing of regulations for establishing new dog parks, which is fantastic news. Walter Pierce is supported by citizen’s donations and could probably use a little financial love from the city in order to get some decent fences built. But whether or not we get a new park, or funds to support the one we’ve got, at least we seem to have a good base of owners who care for their beasts.

Also, a newcomer to the north-Petworth area is Little Rascals, an entirely indoor doggie daycare facility at Georgia & Missouri (in the old Curtis Kia dealership building). I haven’t tried this one yet, but it’s definitely worth a look. They also offer grooming services and host dog training courses by Kissable Canine, LLC. If anybody has used this facility and has opinions/reviews to share, please do, in the comments.

So it’s been a huge success for us. Gomez is our magical ambassador to the neighborhood and our patron saint of weird, foolish joy. I’ve never laughed so hard in my life, simply watching him do what he does. Dog stuff.

And he’s only just turned one year old, which means he has his whole life ahead of him. This means we’ll witness the evolution of our slice of DC together.

more stories
Previous
To Rent or To Sell?
Next
Check Out Petworth and PoP in Today’s Express