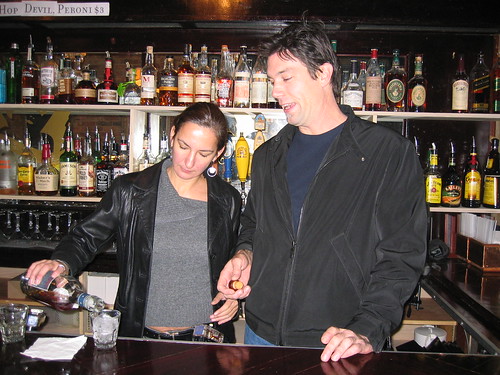 I was able to sit down with Matthew and Rose this Saturday to learn a little bit about them and their plans for Temperance Hall, which indeed will be renamed Looking Glass Lounge (Check out last week’s City Paper for an ad they placed). Matthew, 45, hails from Manhattan and his wife Donna comes from the great city of Detroit. Matthew has lived in the Mt. Pleasant neighborhood for the past 20 years and Donna for the past 7 years. Matthew originally moved to Mt. Pleasant because at that time it was the neighborhood that most reminded him of New York. He liked the diversity there and it was a neighborhood he could afford.

You’d think owning and running the Wonderland Ballroom would leave no time for other pursuits but nothing could be further from the truth. Rose runs an international public health non profit called Data Dyne while Mathew runs a property maintenance company.

Previously Matthew had been a bartender at Madam’s Organ. Out of this experience he decided to look for a bar of his own. They initially looked in the Brookland neighborhood but many of their friends had begun moving to Columbia Heights and Petworth so they became familiar with those neighborhoods. One day a friend called them and let them know that Knob Hill was closing on 11th Street. Remember in 2004 11th Street was very different from today but Matthew and Donna thought it would be a great real estate investment and hopefully a bar in that location would break even. They had no idea that the Wonderland Ballroom would become such an amazing success. As a result, Matthew explained with a frequent laugh, they had to “learn the business”.

They came up with the name Wonderland Ballroom because there many old glorious “Ballrooms” in Detroit and New York. It was a little bit tongue and cheek to name a bar on 11th Street ‘Ballroom’ and it also was a bit of an homage to where they came from. They were very excited to open up a neighborhood bar because no one was doing that at the time. Rose said that Wonderland reminds her of a bar that should would go to in Detroit called the “Tap Room”.

They both pointed out to me that there actually isn’t a “Wonderland” theme at the Wonderland Ballroom. They described the theme at Wonderland as more urban salvage. Keeping with that theme they have just acquired the “Common Share” sign from the recently closed legendary bar on 18th Street in Adams Morgan. So keep your eyes open for that next time you go to Wonderland.

They are extremely proud of Wonderland and the positive development it has brought to 11th Street. Mathew noted that as a result of Wonderland opening “cabs now come to Columbia Heights and the neighbors love that.” They’d also like to think Wonderland’s success contributed to Red Rocks opening up just up the block. Mathew and Donna are both huge fans of Red Rocks and they think that it is really cool that they are there now.

As mentioned in an earlier post, some of the changes coming to Looking Glass Lounge include expanded seating. Some of you who have already visited Temperance Hall may have noticed that some of the dividers have been removed between the booths. Additionally, there has been the addition of new cushioned bar stools that swivel. Another change you may notice is that the TV will no longer be on unless there is a local team playing in a sporting event. Matthew explained that the idea is that space will become more of a place to eat and drink and socialize. In the distant future it is possible that they may get an “entertainment endorsement” that will allow for some live acoustic music to accompany brunch. Matthew and Rose both hope to better integrate the basement and patio into the bar. There will be more heaters put out on the back patio for those who wish to smoke in a comfortable environment. As for those who were concerned about an Alice in Wonderland theme, you need not worry. Rose explained that it all ready is the Looking Glass as she pointed out all the mirrors to me with a smile.

You will also notice that the beer choices have changed. Currently on tap there is Hoegaarden, Stella Artois, and Dogfish Head. But many more are coming including Boddingtons. To accompany the new beers there is a new Happy Hour. Happy Hour is everyday until 8pm with $3 Dogfish Head & Stella Artois and $4 Hoegaarden plus $1 off Chimay and Rail Drinks.

Finally they will be converting the jukebox upstairs to a 300 CD jukebox that is not connected to the internet. When no one has selected music for the jukebox there will be a stereo set up that will play an ipod and cds. They will also be moving the location of the jukebox to make it more accessible as they both noted that socializing around the jukebox is “how guys and girls get each other’s phone numbers.”

Both Matthew and Rose stressed that the changes will not really be noticeable to the casual customer. Matthew summed it up this way, “My goal is that people who have been here before on occasion will walk in and say ‘yeah I’ve been here before but it feels more comfortable’ but I don’t expect anyone to notice any of the changes we make”.

I found Matthew and Rose to be very open, friendly, and warm. I truly believe that they embrace the idea of the “neighborhood” bar and seek to ensure that the Looking Glass Lounge remains one. I’m personally very excited about the new beer selections and of course the great new happy hour. Also don’t forget that Dan Searing will remain General Manager and I think Dan has a very strong connection with the community and their desires. So the next few weeks will be a bit of a transition period. I’m really excited to see how the new seating takes shape. Not that I wish the bar was sold but if it had to be sold, I am relieved that it was sold to people who truly understand the importance of a neighborhood bar to this community. I am sure we will revisit this transition from time to time but after speaking with Mathew and Rose I’m feeling pretty optimistic.

more stories
Previous
An Odd Combination No?
Next
Mt. Pleasant House of the Day – Ready For Christmas