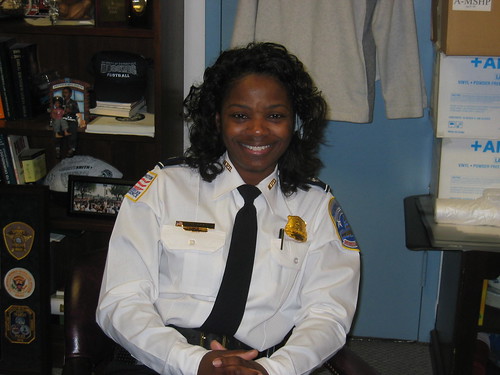 We learned a couple of weeks ago that Ward 4 received a new acting police commander. I had the great pleasure of sitting down with the acting commander, Inspector Linda Brown.

Inspector Brown is 42 years old but could easily pass for 24 years old. But make no mistake she is no nonsense and receives the utmost respect from her officers. I was pleasantly surprised to see how down to earth she was. She did not spin any of her answers. I admired her direct responses to all of my questions. Originally from Memphis, TN Inspector Brown currently lives in Clinton, MD. She has been on the force for 19 years and has had previous experience in the 4th District where she served as a Patrol Sergeant for 2 years. She describes those years as the best years of her 19 year career. She does not know how long her tenure will be as acting commander of the 4th district but while she is serving in this capacity she will serve the residents of Ward 4 and aims to “keep them as safe as they possibly can be.”

Tactics in Combating the Recent Rise in Crime

Given the recent spate of crime in Ward 4 I asked Inspector Brown if this was simply a perception or a fact. She explained that “crimestats don’t lie” and that indeed there has been an increase in robberies in the last 60 days. She also acknowledged that have been a number of reported gunshots in the last few weeks. To deal with these events Inspector Brown explained that there has been 24 hour police coverage around certain hot spots where gunfire has been reported. One of the obstacles faced is that Inspector Brown only has one light tower for the whole ward. As a result she has to decide where it is needed most , so she makes that decision and waits until that area is stabilized before moving it to the next location. Regarding the recent gunfire near Kennedy, Longfellow and Farragut streets, Inspector Brown informed me that Vice is also working the area and they have determined some of the names of the players involved and are keeping a close eye on their activities.

Inspector Brown explained that often MPD will get indicators that there is about to be some kind of eruption in a particular area. Shortly thereafter there will be a reporting of gunshots fired. I was stunned to learn that sometimes it is simply criminals testing out new weapons. I found it to be extremely interesting that often a rival crew will then fire gunshots a few days later in retaliation for the previous shooting even though it was simply to test a weapon. Then three or four days later these crews will get into a physical confrontation. This is apparently what occurred in the area around 7th and Longfellow from Halloween to the 2nd week of November. I asked Inspector Brown how this cycle is broken, specifically I asked if it stopped because of simple fatigue? She replied “It is hard to get into the mind of the criminal whether it is fatigue or because of MPD’s 24 presence.” As long as the cycle is broken Inspector Brown “will take that as a win.”

I asked Inspector Brown to explain her vision of community policing that we have heard so much about. Inspector Brown explained that there needs to be a balance between foot patrols and car patrols because it is the cars that respond to 911 calls. She also explained that not every officer can be a foot patrolman. They need to find and train officers who can engage the community effectively. She did mention that Ward 4 will be increasing foot patrol beats as officers are trained. Currently there are 21 foot officers in the 4th District. Foot patrols are placed based on analysis from 4th District’s Lieutenants as well as the location of robberies and citizen concerns. There is not a precise formula but they are constantly shifting locations in order to best prevent and deter violent crime. Despite the fact that there are only 21 foot officers in the 4th District, Inspector Brown explained that officers riding in a patrol car should also park their cars and walk three or four blocks from time to time.

What keeps Inspector Brown up at night?

I asked Inspector Brown what keeps her up at night. She answered “the fear that a street robbery will turn into a serious assault or homicide.” She replied that a close second “is a burglary when someone is home during the burglary.” I asked her what she recommends one do if they find themselves in this situation. She said that “if you are robbed you should just do what the robber asks you to do and don’t resist then call the police.” Regarding burglaries she advised “get to a secure location within your home, like a closet, and call the police, do not confront the burglar.”

It is obviously very early into Inspector Brown’s tenure but I believe that Ward 4 is being served by a capable and experienced acting commander who will bring positive change to our ward. If anything needs to change I believe it is managing expectations. When we hear the Mayor and the Chief of Police tout the reemergence of community policing it would be in their best interests to explain to the residents that this change will not come over night. Additionally, it would be in their interests to explain the importance of officers in police cruisers that can respond to 911 and other calls. Having said that if we do not see a visible increase in foot patrols in the next 6 months I will be extremely disappointed and will feel like the Mayor and Chief have deceived us. I honestly believe that the right intentions exist but it is time to make them a reality. I have great confidence that Inspector Brown will help shepherd the necessary changes needed in Ward 4.