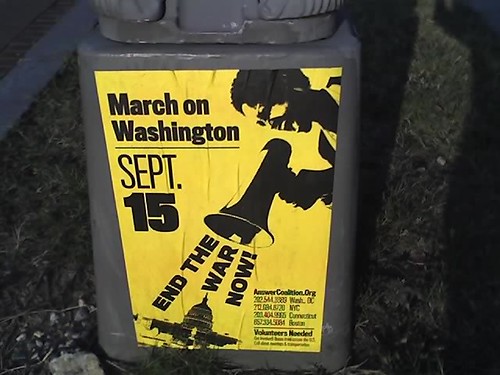 Protest the protest signs, originally uploaded by Prince of Petworth.

Now that was a protest I could get behind. Remember the classic show “What’s happening now”? That was a proper protest. There were people holding placards and there was no damage to public parks. And in the end they got Roger and Rerun back in the building. Alright back on point, thanks to a reader for alerting me to the fact that every single lamppost in Grant Circle has been plastered with protest signs.

The reader writes: “ANYWAY. I got home from a week of vacation and noticed that all around Grant Circle, on every single light post, are bright yellow anti war posters. Now, I’m totally against the war, but I’m also against organizations littering all over public property and when I called ANSWER, the sponsor of the anti war march, she told me that they were allowed to do that because light posts were public property, that i was wasting her time and she hung up on me.”

I have to say that is pretty messed up. We are not talking about the war itself. We are talking about the fact that these signs are a blight. They also have serious adhesive an will not be easily removed after Sept. 15th. So what the hell? Do we have to sacrifice Grant Circle in the name of “free speech”? Do you think the organizers will remove these stickers after the march? I am sure there has got to be a better way. What do you think?