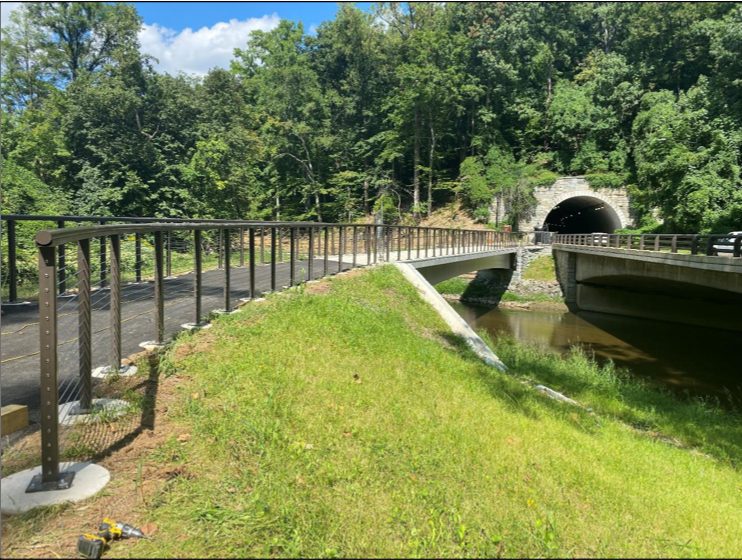 “The District Department of Transportation (DDOT) today announced that the rehabilitation of the Rock Creek Trail is now complete, offering bicyclists and pedestrians nearly 3 miles of reconstructed trail as well as a new 110-foot pedestrian bridge.

Originally expected to be completed in Spring 2023, the $14.6 million project was finished six months ahead of schedule. It rehabilitated more than 2.8 miles of the paved, multi-use trail, spanning from Wards 1 through 4 from M Street NW in Georgetown to Broad Branch Road NW.

The highlight of the project is the new 110-foot pedestrian bridge just south of the existing Beach Drive tunnel near the Smithsonian National Zoo. The new bridge provides a dedicated space for bicyclists and pedestrians away from the existing narrow sidewalk along Beach Drive NW. The bridge connects to a safer, dedicated path that connects the Rock Creek Multi-Use Trail and the Zoo Loop Trail. The project also re-opened the Zoo Loop Trail, which had previously collapsed near the National Zoo.

The project also included widening and improving the trail surface, streambank stabilization in Rock Creek and Piney Branch, and significant stormwater management improvements, including the use of permeable pavement to aid drainage and decrease runoff. Almost one mile of new trail was constructed alongside Piney Branch Parkway NW between Beach Drive NW and Arkansas Avenue NW, which provides new access to the park for the Mount Pleasant and 16th Street Heights neighborhoods.

The project was the result of a coordinated partnership between the National Park Service, DDOT, and the Federal Highway Administration’s Eastern Federal Lands Division.

The Rock Creek Park Multi-Use Trail is a critical north-south route that serves as an important transportation and recreational resource for more than 2,000 daily users. The trail is a key element of the Capital Trail Network, the vision for an 800-mile network of trails throughout the region.”