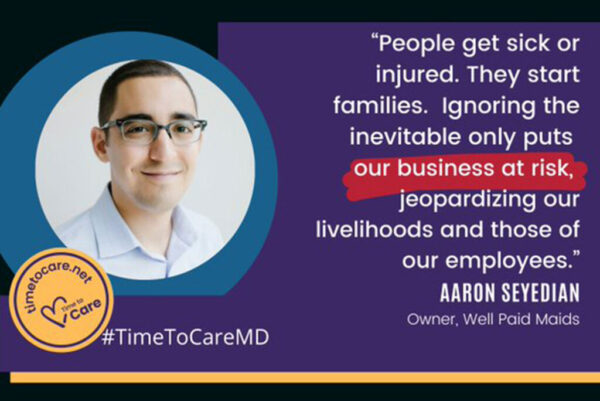 On April 9, Maryland became the 10th state to pass a paid family and medical leave program. The program ensures workers receive temporary benefits when they take time off to care for a sick loved one, a new child or themselves if they suffer from an extended illness or injury.

Aaron Seyedian and his employees at Well-Paid Maids have worked with the Maryland Family Network since 2019 to get the law passed. His employees are covered by a similar program already in effect in D.C., but a huge part of Well-Paid Maids’ mission is to incite larger political change.

“Higher wages are great for workers, but they’re only as good as someone’s ability to work,” Aaron says. His company, Well-Paid Maids, was founded on the notion that a living-wage business can be successful in traditionally low-paying industries.

He continues: “The status quo was incredibly cruel and unique among rich countries. People worked through illness and injury — or right after having a child. With this new program in Maryland, people won’t have to do that.”

Well-Paid Maids has spent more than three years supporting this program. Back in 2019, Aaron drove to Annapolis to testify in support of the program as a business owner. He also published a letter to the editor in the Baltimore Sun.

“We were making the case that paying into a program like this is not at all a burden for employers,” he explains.

In 2020, Well-Paid Maids submitted written testimony, and in 2021, Aaron kicked off the paid leave coalition press conference with testimony in support of the bill. In 2022, Operations Manager Dasha Johnson also testified.

Maryland’s recently passed paid leave program is certainly a win for the progressive movement — but it’s just the beginning. Aaron and his team have been advocating for a federal paid family and medical leave program.

“As more and more states are passing these programs, hopefully we will get to a place where it becomes as uncontroversial as unemployment insurance,” Aaron says.